Did your friend just ask you to order them a ‘Venti‘ from Starbucks? This post unpacks the meaning and origin of this term.

The expression ‘Venti‘ is Italian for ‘twenty.’ A ‘Venti‘ coffee at Starbucks contains 24 ounces of coffee. It’s part of the cup rating system used by Starbucks to help customers select the beverage to cater to their needs. Starbucks CEO, Howard Schultz, got the inspiration to name the cup size after visiting Italy.

However, ‘Venti‘ in Italian means ‘20‘,’ not ‘24.’ So, it’s common for customers to assume that the cup size is 20 ounces. Starbucks has four size options available at its coffee shops for takeaway drinks.

However, the ‘short’ option is no longer on the menu but is available upon request by the customer. A Venti coffee contains three espresso shots, which is the same as a grande. To total caffeine content found in a Venti Starbucks coffee is 150 mg, and it’s consistent across all the beverage offerings on the menu.

“I’m heading down to Starbucks to order a coffee. Do you want me to get you your usual Venti? I don’t know how you can handle all that caffeine.”

“Did you know a Starbucks Venti coffee has around 150 milligrams of caffeine? And we wonder why America has an anxiety crisis with people drinking that much coffee every day.”

“A venti coffee is too much for me. A grande is fine, thanks. If I have a venti, I’ll be getting up to pee all morning at work.”

“Damn the Venti, get me a Trenta, would you? I like my beverages as big as possible. I’d buy that if they had a bigger cup than 31 ounces.”

“Do you know how many calories are in that Starbucks Venti iced mocha? It’s like your entire energy needs for the day. No wonder you’re as big as a house.”

“Starbucks just closed 16 international stores. Wow, I hope they don’t take away the Venti size from the menu because of all the pressure from health activists.” 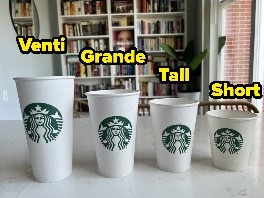 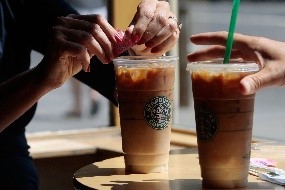 The expression ‘Venti’ originates from the Starbucks coffee franchise. CEO Howard Schultz traveled to Italy in 1983. The trip gave him the inspiration he needed to start the world’s most iconic coffee brand. On launch, Schultz offered three sizes, short, tall, and grande.

After the brand’s success, Schultz launched the Venti in the 1990s, nearly a decade after serving his first cup of coffee. After introducing the venti cup, Schultz dropped the ‘short’ from the menu. However, it’s still available on request at any Starbucks.

Phrases Opposite to Venti

The word ‘venti’ only applies to 24-ounce drinks served at coffee shops like Starbucks. Some people mistakenly think ‘venti’ is a colloquialism for ‘twenty,’ so the cup must hold 20 ounces. However, that’s incorrect. While ‘venti’ is Italian for ‘twenty,’ the ‘venti’ coffee cup has a holding capacity of 24 ounces.

You can use ‘venti’ when ordering the size of your preferred coffee-based beverage at Starbucks. The phrase applies to all the beverages on the menu, describing a 24-ounce serving of the drink. The barista will ask you which size you want when taking your order. Venti is the second-largest size cup in the Starbucks drinks range.

‘Venti’ doesn’t only apply to Starbucks coffee. Many other coffee houses across the United States serve a Venti size drink. However, it’s not very common in countries outside the US, and many international Starbucks locations don’t offer the ‘venti’ size because there is little demand for it.