Are you watching anime? Do you know what an ‘Ashura‘ is? This post unpacks the meaning and origin of this expression.

The ‘Ashura’s‘ are mythical demon gods in Japanese culture. The typical Ashura has multiple legs and arms and several faces. In Japanese mythology, they are spiritual beings and exist in the lowest level of the afterlife.

The Ashura has a human-like appearance but is larger in size than humans. The Ashura are war gods because they cannot control their emotions, defaulting to violence and chaos due to their inability to achieve enlightenment.

The Ashura has a large ego and the desire to outperform others. These beings have no patience, and they solve problems using violence.

“Did you watch the latest episode of ‘Ashura’ last night? Man, that anime series is spectacular. The artwork and the storyline are phenomenal, and I can’t get enough of that show.”

Re all terrified of them. Personally, I don’t get why these people believe in that nonsense.”

“The Ashura are evil beings, and they’ll fill your mind with negative thoughts and emotions. Do your best to block out these feelings and discover what you need to change in your life.”

“The anime ‘Ashura’ is one of the best examples of Japanese mythology in anime. The series is outstanding and a great look into the culture of this island nation.”

“I’m not sure if I’m dealing with an ‘Ashura’ or a kind spirit. It makes me nervous about playing around with these things.” 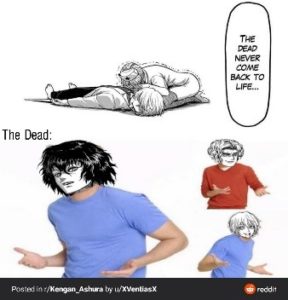 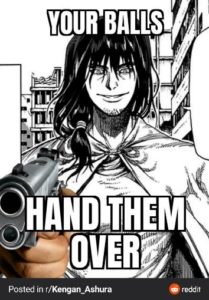 The expression ‘Ashura’ originates from Japanese mythology. Language experts are uncertain when the term ended up in the English lexicon or who coined the term in English. However, some experts believe it comes from introducing the ‘anime’ subculture into western society during the 1990s.

When reborn as an Ashura, legend states that these entities cannot control their emotions. Ashura can’t achieve enlightenment due to this problem of failing to control their mind and emotions. As a result, they may never realize the state of a buddha, remaining trapped in an endless cycle of reincarnation they can’t escape.

Phrases Opposite to Ashura

Some westerners may pronounce the word incorrectly or use it in the wrong application. Typically, only anime fans and Japanese people will understand the meaning of ‘Ashura.’ Using the phrase to describe a demon to a westerner may leave them feeling confused.

You can use the term ‘Ashura’ when describing a demon or spiritual entity inclined to war and terror. Typically, an Ashura has multiple faces, arms, and legs, similar to the God ‘Kali’ in the Hindu religion. You can use ‘Ashura’ to describe demons in your life or in other people’s lives. The phrase suits social use amongst friends.

You’ll need to talk to a Japanese person who understands the term or an anime fan if you want them to know what you’re talking about. The ‘Ashura’ is a mythical being and doesn’t exist in western culture. So, you’ll need to be sure you’re talking to someone that can understand the reference. It’s a well-understood term in Japanese, but few westerners appreciate its meaning.