Are you looking for a way to get someone to stop asking about who died in a disastrous event? You could get them thinking by using the expression “ask not for whom the bell tolls.” This post unpacks the meaning and origin of this proverbial saying.

The expression “ask not for whom the bell tolls” is a proverbial saying reminding us that we all have a connection with each other. It means that you should not engage in thoughts wondering about other people’s suffering or death because one day, it will happen to you.

Lee: “Did you see that earthquake in Tonga? Man, that was some explosion! I wonder how many people died during that blast?”

Joey: “C’mon Lee, why are you wondering about other people’s suffering? Don’t you know that saying, ‘Ask not for whom the bell tolls?'”

Joe: “The other day, I was watching them burying the bodies of the victims in that island trench. I found myself wondering who all those innocent people were.?

Jessie Mae: “Joe, sometimes it’s best not to ask for whom the bell tolls; it’s just going to drive you insane, do you know what I mean?” 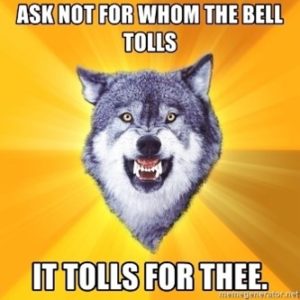 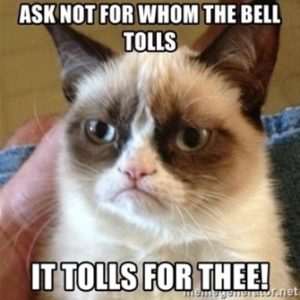 The origin of the expression, “Ask not for whom the bell tolls,” comes from the author, John Donne (1572-1631). Donne was a resident of Tudor and Stewart in England. At that time, the church bells would toll throughout the town during the day to mark significant life events, particularly funerals.

When writing the line in his “Devotions Upon Emergent Occasions, Meditation XVII,” Donne used the expression to imply we are all interconnected socially and spiritually.

The line appears as the following in the text.

“Perchance he for whom this bell tolls may be so ill, as that he knows not it tolls for him; and perchance I may think myself so much better than I am, as that they who are about me, and see my state, may have caused it to toll for me, and I know not that.”

“If a clod be washed away by the sea, Europe is the less, as well as if a promontory were, as well as if a manor of thy friend’s or of thine own were: any man’s death diminishes me, because I am involved in mankind, and therefore never send to know for whom the bells tolls; it tolls for thee.”

Phrases Similar to Ask Not for Whom the Bell Tolls

Phrases Opposite to Ask Not for Whom the Bell Tolls

Ways People May Say It Incorrectly

Some people may confuse the saying with a warning of impending danger. This use might have some merit since the correct use of the phrase reminds us of our mortality. However, it’s a way of telling someone not to pry into the death of another individual because they will eventually end up in the same scenario.

Acceptable Ways to Phrase It

You can use the phrase “ask not for whom the bell tools” as a reaction to someone asking you about the identity of people who died in a scenario. You could say it if you’re walking past a funeral ground and a friend tells you they wonder who died.

You could use it as a reaction to someone stating they wonder who or how many people died when watching reports of a natural disaster that claimed lives—the saying suits professional and social conversation.