Did you arrive home from the bakery to find they gave you an extra lunch roll when you ordered a dozen? If so, you could say you received a “baker’s dozen.” This post unpacks the meaning and origin of this expression.

It’s more common for people to refer to baked goods when using the term. However, the saying can apply to receive a 13 quantity of any item when ordering a dozen said items. So, you could use it to refer to the greengrocer giving you 13 bananas.

“I ordered a dozen rolls from the bakery and got home to find they gave me an extra one. I don’t know if they meant to give me a baker’s dozen or if it was a mistake.”

“The guy at the hardware store gave me 13 nuts and bolts instead of a dozen like I asked. Oh, well, we got a baker’s dozen, and now we have a spare set.”

“I ordered 12 shots at the bar, and they gave us a baker’s dozen because the order was so big.”

“I went to McDonald’s and ordered a dozen cheeseburgers for the kids. I got home and found they gave me 13. That’s a baker’s dozen, and now we have a spare for someone that’s really hungry.”

“Look at those 13 tourists sitting on the dock at the lake. Don’t they know it’s Friday the 13th, and they’re giving the serial killer a baker’s dozen of victims?” 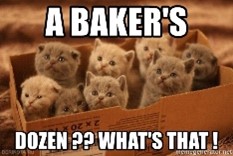 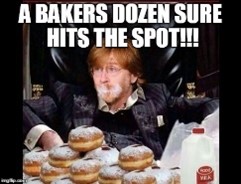 The origin of the expression “baker’s dozen” comes from the practice of English bakers in Medieval times. Baker’s would often bake an extra loaf of bread in each batch to avoid being fined by the crown for selling short weights.

This practice evolved several centuries before the saying arrived in the language. England is the oldest western nation with a history of regulating trade. English bakers fell under the trade guild, “The Worshipful Company of Bakers,” dating back to the reign of Henry II.

At the time of the creation of the saying “baker’s dozen,” the “Assize of Bread and Ale” law came to power. In 1266, King Henry III brought back a statute regulating the price of bread in accordance with the wheat price on the market.

Bakers who short measured would receive a fine or flogging – or both. They sold bread by weight, not quantity, and under-weighing the bread was a serious offense.

Phrases Opposite to Baker’s Dozen

Some people may think that the phrase only refers to baked goods. “Baker’s dozen” refers to the quantity of 13 and applies to almost anything you can think of. From candy bars to nuts and bolts, a baker’s dozen refers to 13 units of an item.

You can use the phrase “baker’s dozen” when referring to a quantity of 13 in any given situation. The saying doesn’t have to apply to baked goods alone.

For instance, you could buy a pack of 13 plain white t-shirts on a special sale advertising the deal as a “baker’s dozen” for the price of 12.