Are you in the chat and someone drops a blue heart emoji? What does this mean? Why didn’t they just use a red heart emoji like a normal person? This post unpacks the meaning, origin, and use of this lesser-know emoji.

Emojis were a revolution to the messaging game. Instead of writing out your feelings, you can just tap an image that represents what you’re thinking about. The blue heart emoji is one of the lesser-known emojis, but it has some use today.

Typically, more people use the red heart emoji to reference feelings of love or affection in messaging chats. However, heart emojis come in a range of colors, and the blue heart emoji is one of the more popular alternative colors to using the red version.

However, you could use it when referencing your love of aquatic wildlife, such as dolphins. For example, “I💙 Dolphins.” In this case, the blue would reference the ocean.

“I can’t wait to see you tonight, it feels like it’s forever since we last held each other 💙”

“We’re going to the public pool this afternoon, do you want to come? We💙 the pool and it’s the best way to stay cool in hot weather.”

“Did you see that picture of that pod of dolphins swimming through the waves? It’s so beautiful to watch nature in motion 💙” 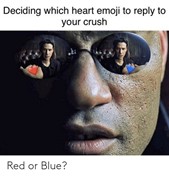 No one knows the origin of the blue emoji or what it really means. However, emojis have a long history, extending back over 20-years to the introduction of text messaging on cellphones in the early 2000s.

In 1999, a Japanese cell phone manufacturer, “NTT DOCOMO,” released a collection of emojis for pagers and cell phones. The word “emoji” is a blend of two Japanese words for “letter” and “picture.” However, many people make the mistake of thinking that the word has something to do with “emotion” when that’s not the case.

There are more than 3,000 emojis around today, and most of them go unused. Popular emojis, such as hearts, have regular use in chats and text messages. Some experts state that using the blue heart emoji could refer to “being coldhearted,” but there is no evidence that that is the case since many people use it instead of the red heart emoji.

Phrases Opposite to Blue Heart Emoji

You can use the blue heart emoji in texting and chats where you’re trying to tell someone that you love them. Typically, the “blue” heart references men or boys, not girls or women, but there is no official meaning of the emoji and how to use it online and in chats.