Are you looking for an expression that defines an angry person who always seems to have a bad attitude? If so, you could tell them, “you have a chip on your shoulder.” This post unpacks the meaning and origin of this expression.

The meaning of a “chip on your shoulder” refers to a person having a bad attitude or something that’s bothering them, causing a change in their behavior to a grumpy state. It can also refer to a sense of inferiority or a perceived grievance with another person or entity.

“Don’t get too close to Mike, he might seem like a nice guy, but he’s got a chip on his shoulder. Cross him, and he’ll explode with outrage at any moment.”

“That kid has a real chip on his shoulder. He’s always acting like he has something to prove. I think he needs to see a psychiatrist.”

“Tracy has a huge chip on her shoulder. That woman is always so bitter and angry that I can’t say I enjoy talking to her.”

Tom’s father died when he was young, and it left a chip on his shoulder. He’s always so defensive when you challenge him on anything.”

“I don’t like how that turned out. It left a chip on my shoulder, and I’m ready to give that guy hell for trying to undermine me in public.” 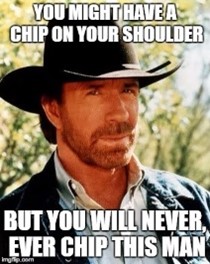 The origin of the expression “chip on your shoulder” comes from “Letters from the South,” written by American historian and author James Kirke Paulding in 1817, where it appears as follows.

“A man rode furiously by on horseback and swore he’d be d—-d if he could not lick any man who dared to crook his elbow at him. This, it seems, is equivalent to throwing the glove in days of yore, or to the boyish custom of knocking a chip off the shoulder.”

The Long Island Telegraph published an article containing the phrase in 1830.

“When two churlish boys were determined to fight, a chip would be placed on the shoulder of one, and the other demanded to knock it off at his peril.”

However, the first use of the expression by British writers only appears in the 1930s in “Gentleman in the Parlour,” written by Somerset Maugham, where it appears as follows.

“He was a man with a chip on his shoulder. Everyone seemed in a conspiracy to slight or injure him.”

Phrases Similar to Chip on Your Shoulder

Phrases Opposite to Chip on Your Shoulder

Ways People May Say Chip on Your Shoulder Incorrectly

The phrase doesn’t have a literal meaning. It’s a way of saying that someone acts angry or frustrated, and they are quick to lash out. It’s common for the phrase to appear with the words “on” their shoulder, but it also works with his, her, their, one’s, and many other pronouns. However, saying a chip “in”’ their shoulder” would be the incorrect use of the expression.

Acceptable Ways to Phrase Chip on Your Shoulder

You can use the phrase “chip on your shoulder” when you’re trying to tell someone they have underlying anger issues or psychological problems that affect their behavior. The term suits social and professional use.

You could use it to describe how a person a work has a bad attitude and seems to always act bitter around people for an unknown reason. You could use it to explain how a friend has emotional or psychological problems that make them angry or frustrated.