Did someone just give you an instruction or threaten you? If you want to show them that you accept their challenge, you could use the phrase “cowabunga it is.”

Let’s unpack the meaning and origin of this phrase.

Cowabunga It Is Idiom Meaning

“Cowabunga it is” refers to accepting a challenge or going against a request to your detriment. The word “cowabunga” is an exclamation of excitement when doing a task. For instance, if you’re jumping off a high ledge into a waterfall, you could yell “cowabunga” as you leap into the air.

Using “Cowabunga it is” in conversation, therefore, means that you don’t care, and you’re willing to throw caution to the wind at the risk of landing up in trouble with another person or the authorities. It serves as an informal acceptance of a challenge, and people will use it in comical situations online.

“Cowabunga it is” is a popular meme, and you’ll see it appear with a headshot of the Teenage Mutant Ninja Turtle, Michelangelo gritting his teeth.

For instance, someone could tell you in chat that they will kill you if you make the mistake of ruining their gameplay. You would reply with “cowabunga it is” to flaunt your carefree attitude in their face before doing what they asked you not to do.

Cowabunga It Is Example Usage 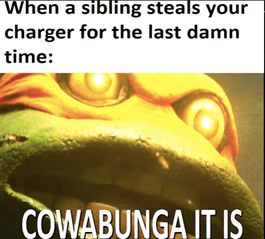 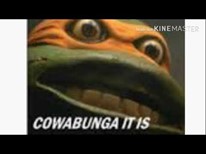 “The neighbors told me to stop playing music, or they’ll call the cops. Cowabunga, it is.”

“The folks told me to stop using the car when they’re away. Cowabunga, it is.”

“The teacher told us that anyone caught cheating risks expulsion. Cowabunga it is.”

The government said people need to wear masks outside and stop taking risks. Cowabunga it is.”

Cowabunga It Is Idiom Origin

The origin of “cowabunga it is” dates back to the nineties and the introduction of “the Teenage Mutant Ninja Turtles.” The character, “Michelangelo” was a carefree member of the squad, using a surfer dialect to communicate with his brothers.

Michelangelo was famous for coining the phrase “cowabunga dude!” While many credit the turtles for popularizing the word, it first appeared in the “Howdy Doody Show,” with Bill LeCornec using the term on screen for the first time.

The word cowabunga was popular with 90s youth, and the rendition “cowabunga it is then” first appeared in the fourth episode of “Power Rangers in Space in 2012.”

The meme would later evolve to include the caption “cowabunga it is then” in 2018. The meme swept through Reddit, and the streaming platform, Twitch.

Phrases Similar to Cowabunga It Is

Phrases Opposite to Cowabunga It Is

Ways People May Say Cowabunga It Is Incorrectly

You won’t use “cowabunga it is” to describe a mediocre response. Also, it’s not always applicable to something to do with the ninja turtles; it could represent any situation where you intend to exhibit risky or outlandish behavior. Using it to describe boring or average behavior is the wrong use of the term.

Acceptable Ways to Phrase Cowabunga It Is

You can use “cowabunga it is” when describing your no-holds-barred attitude to a situation or a person. Typically, the expression shows that you’re willing to take risky behavior to achieve a goal. In many cases, you’ll be referring to your attitude to another person or action you intend to take that might seem ludacris to others.