Are you listening to K-pop? Do you know the supergroup ‘BTS?’ If so, you’ve probably heard their smash hit, ‘Daechwita.’ What does this Korean word mean, and how is it used in the song?

Let’s unpack the meaning and origin of this expression.

The word ‘Daechwita‘ (대취타) translates to ‘Great Blowing and Hitting’ and refers to a genre of Korean music. This traditional art form consists of music with a military theme, played by artists using percussion and wind instruments. Artists will perform while marching in a parade or during a static concert or performance.

‘Daechwita‘ is also the name of a song by the popular South Korean K-pop boy band, BTS. The piece involves the use of traditional instruments, paying homage to the genre. It’s one of the group’s most popular songs and a big hit in the Korean market.

“Are you going to the BTS concert this weekend? I think he’s so dreamy, and his music is amazing. I hope he plays that track ‘Daechwita,’ it’s my favorite.”

“Are you thinking about downloading a BTS song? I recommend you start with ‘Daechwita, his most famous release to date.”

“K-pop is a multi-billion dollar industry. I think BTS sits at the top of the pack. His track ‘Daechwita’ was on the local radio for months.”

“K-pop stars live a hard life. They have to practice every day, and if they don’t, they get replaced. That guy BTS is at the top of the industry, and his track ‘Daechwita’ was a shout-out to the old school.” 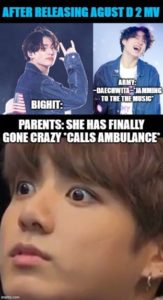 The origin of the word ‘Daechwita’ comes from the South Korean K-pop star, Agust D, also known as ‘Suga’ from the supergroup BTS. Suga released a rap song called ‘Daechwita (대취타)’ with the track featuring on his second mixtape, ‘ D-2,’ released in 2020. Suga claims the song is a dedication to the ‘Daechwita’ music genre, and he used samples from real ‘Daechwita’ in the track.

The track is one of the biggest from the supergroup and is well known in the K-pop community as an anthem for Korean youth. While the band BTS isn’t well-known to Americans and Europeans, they have a huge following in Asia and are one of the industry’s most successful K-pop boy bands.

Phrases Opposite to Daechwita

BTS is a Korean K-pop star with a huge following in Asia. However, English-speaking people likely won’t know who you’re talking about or what ‘Daechwita’ means. This word is a niche term used by the K-pop community only.

Daechwita also describes a formal type of music and dance in Korea. BTS based his song on this culture, and several videos promote Daechwita on YouTube and other online sources.