Are you looking for a word to describe the underdog in a sports tournament with a chance of winning? You could say the team is the ‘dark horse.’

The expression ‘dark horse’ refers to a team or person with no backstory or little information about past performance. The term is popular in sports culture, referring to the underdog in a sports tournament.

If a team is a dark horse, they have a good chance of winning because other teams underestimate their capabilities. A dark horse is a threat to the favorite to win the competition.

“The Celtics are a dark horse in the playoffs this year. They have a new squad and are on a winning streak right now.”

“He’s a dark horse in the listings this year. I heard he’s done a lot of work in the offseason, and we need to watch out for this year.”

“The Bucks are a dark horse in this year’s conference. While no one expects them to do well, they have a great team on paper. Let’s see if they can pull it off.” 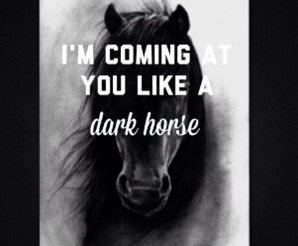 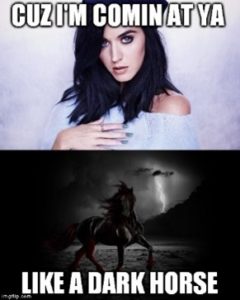 The earliest appearance of the expression in print comes from Benjamin Disraeli, in his book, “The Young Duke,” published in 1831, where it appears like the following.

“A dark horse, which had never been thought of … rushed past the grand stand in sweeping triumph.”

The symbolic use of the expression refers to candidates for academic preferment. This use of the phrase first appears in the Saturday Review in 1860 as follows, “A Headship … often given by the College conclaves to a man who has judiciously kept himself dark.”

The saying also appears in “Sketches from Cambridge,” published in 1865.

“Every now and then, a dark horse is heard of, who is supposed to have done wonders at some obscure small college.”

Phrases Opposite to Dark Horse

You can use the expression ‘dark horse’ when referring to an ‘underdog’ or someone that appears to be a rising threat against you in some form of competition. It’s common for people to use it in sports competitions and in gambling on sports events.

The phrase suits professional and special use. Use it at work to describe a new company in your market that no one expected to gain rapid market share. Use it with your friends to describe the underdog in the NBA playoffs that might have a chance of sweeping the tournament.