Are you looking for a phrase to describe your attitude toward holding stocks for the long term?

Traders or investors with ‘diamond hands’ believe that markets only go up in the long term and holding or ‘hodling’ their crypto is the best long-term strategy.

The phrase describes investors in the 2021 ‘meme stock’ craze, which saw an infamous ‘short squeeze’ on stocks like GameStop ($GME) and AMC ($AMC). The phrase first appears on the forum Reddit, in the r/WallStreetBets subreddit.

‘Degenerates’ posting in the r/WallStreetBets thread would use the phrase to describe their attitude of holding onto their stock, despite its falling price action. The opposite of ‘diamond hands’ is ‘paper hands’ If you have ‘paper hands,’ it means you panic sell to avoid a drop in share price.

“Are you really taking investment advice from Dave ‘Paper Hands’ Portnoy again? You guys deserve to get fleeced by that pump-and-dumper.”

“C’mon, everyone, hold your $GMC position and defend against the hedge funds. Diamond hands everyone, don’t give up!”

“Man, never mind these no-coiners that don’t believe in the power of the little guy. We’re sticking it to the hedge funds. Diamond hands, baby!” 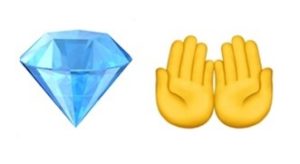 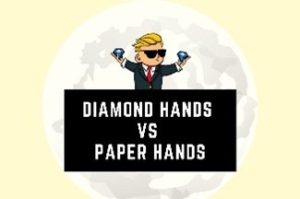 The expression “diamond hands’ originates from the r/WallStreetBets subreddit. The ‘meme stock’ phenomenon of 2021 popularized the phrase, but it first appeared in the subreddit in 2018. No one knows the first Reddit user to coin the term, but it frequently appeared in WallStreetBets threads in 2021.

The phrase spread outside of WallStreetBest during the ‘meme stock’ bubble of 2021, with people using it to refer to holding their positions in stocks like GameStop or AMC. However, the use of the expression faded away later in 2021 after the meme stock bubble burst.

Phrases Opposite to Diamond Hands

Some people may confuse the terms’ paper hands’ and ‘diamond hands.’ Saying someone has ‘paper hands’ means they fold under market selling pressure.

There were cases of influencers like Dave Portnoy from Barstool (DDTG) claiming he had ‘diamond hands.’ However, he folded under selling pressure, selling his investments before notifying his followers about his intention of selling.

You can use the phrase’ diamond hands’ to describe a stock or crypto investor that will hold their investment long-term, despite interim volatility to the downside. The term describes an ignorant investor that doesn’t intend to sell their portfolio in a downward bear market. Instead, they are willing to let the asset price drop to zero and lose everything they have.

It’s common to call someone with ‘diamond hands’ an unsavvy degenerate investor frequenting message boards like 4Chan and r/WallStreetBets. These investors are more akin to gamblers and don’t understand how to trade or invest. Instead, they follow an ideology of holding for the long term, despite the financial catastrophe that awaits them in the future.