Are you looking to correct someone’s text to you? You could fix it and leave the acronym ‘ftfy‘ as a sarcastic reply.

The acronym ‘ftfy’ is an abbreviation of ‘fixed that for you.’ It means you saw something wrong with another person’s post and corrected it in a comment. It can also describe actions on forums where moderators alter or edit a post to update or remove something harmful that may offend people.

Reddit and Twitter users will use the acronym to troll people’s opinions, grammar, or posts. While the term’s original use was in a genuine context, it’s more common to use the acronym in a sarcastic context. Sometimes, the use of ‘ftfy‘ may be offensive or aggressive.

However, many people use the acronym on forums and message boards, and it can have either a genuine or sarcastic meaning, depending on the context of the post. Typically, it appears in lower-case format.

“Hey OP, great article. It was hard to read, so I spaced it out for the other readers. Ftfy, you’re welcome.”

“Ftfy. Now we can all read what you’re saying. Thanks for sharing. We appreciate the info, but please structure your posts correctly.”

“Ftfy. Now your mom doesn’t think you’re responsible for the accident anymore. You can stop crying and come home. Everyone’s waiting here for you.”

“Ftfy. There’s a problem with how the code is syncing, but I took care of it, and everything’s back to its original condition.”

“That painting looked terrible. So, I took my oils and ftfy. Now it looks like a masterpiece. Don’t you agree?”

“Boy, I really ftfy, didn’t I? Sorry, it looks like it just made things worse.” 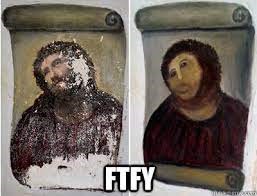 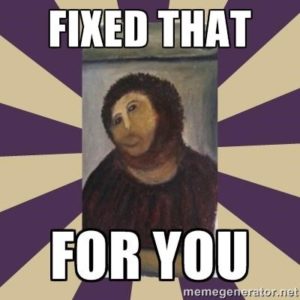 The phrase first appeared in the Urban Dictionary in 2005, and it has a non-sarcastic, genuine meaning. Around 2010, ‘ftfy’ would evolve into a troll people would use when correcting other users online in chats, forums, and message boards like Reddit.

Phrases Opposite to ftfy

The term ‘ftfy’ is not an abbreviation of ‘fifty.’ It has no numerical meaning and stands for ‘fixed that for you.’ The term commonly appears in messages in lower-case letters. Using it in upper-case letters may imply that you’re ‘yelling’ at the OP, causing a bad vibe in the post or message.

You can use the term ‘ftfy’ in text communications between friends when you want to correct their use of grammar or what they said in their message. You could use it to rearrange the letters or words in a friend’s text, or change its meaning, to get a laugh at something comical they say.

The most common use of ‘ftfy’ is on forums and message boards. Users will drop the term to describe how they fixed a user’s post, making it more legible for the other readers. Or they could change the meaning or context of the post as a troll.