Did you receive a text from a friend with ‘STG‘ in the message? Do you know what it stands for? This post unpacks the meaning and origin of this expression.

The acronym ‘STG‘ means ‘Swear To God.’ It’s a common abbreviation used in text message conversations. If you type STG in a text message or chatroom, you’re trying to emphasize what you’re saying to another person.

You’re trying to emphasize that you’re telling the truth and that the person should listen to you. Or, you could be using it as a warning to someone testing your patience. It’s a versatile acronym with many applications in online conversations.

“STG homie, I was in the mall, and there she was, walking around with some other guy. I tied to take a photo for you to prove it, but my battery was flat.”

“STG, if you don’t take that back right now, I’m going to hunt you done and dox you in front of the press. Just say you’re sorry, and we’ll go our separate ways.”

“This amusement park is awesome. I STG, I’m going to get on the rollercoaster before the end of the day. I don’t care how intimidating it looks.”

“I STG, if you kids don’t get your act together and calm down, we’re not getting pizza tonight. I’ll make broccoli and brussels sprouts for dinner instead.”

“I STG, you have to believe me, girl, he’s no good for you, and it’s cracking you up. You just can’t see it like I can because I’m looking from the outside.”

“STG, this is the best steak sandwich I ever had. You were right, Yannis; Uncle Paulie’s is the best ever. I’m getting a few subs to go.”

“STG, bro, this car does 200mph. Just look at the speedometer. It stops at 200. The other day, I took her out on the highway and dropped a muscle car in a drag race.” 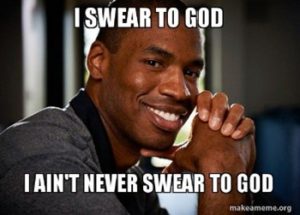 The acronym ‘STG’ originates from the early days of texting culture. In the days of number keypads on mobile phones, users had to type messages using multiple presses on the number keys. This was frustrating, especially when typing out long saying, such as ‘not gonna lie.’ It’s much easier to type three letters than waste your time bashing out 11 in the original expression.

People stuck to using these acronyms even after the advent of the iPhone and QWERTY keypads and predictive text. It seems that texting culture is here to stay. The first record of ‘STG’ in the Urban Dictionary is in January 2005. However, many users and language experts believe the phrase may be in use in text messages as early as the late 1990s.

Phrases Opposite to STG

Some people may use ‘STG’ to refer to the automatic weapon “StG 44,’ a military assault rifle. This term may appear in right-wing forums and groups as a meme relating to gun control. However, STG is more common in text conversations as an acronym for ‘swear to god.’

You can use the expression ‘STG’ in text message conversations and communicating with others on message boards, forums, and chatrooms. STG also suits verbal discussions, and it’s similar to using ‘omg.’ Most people understand the meaning of ‘STG,’ especially if they’re in the millennial and Gen Z demographics.

‘STG’ suits social use, and you can use it when trying to prove your innocence or when making a veiled threat against someone for crossing you or failing to comply with a request. ‘STG’ can have a serious connotation, or it could act as a statement of surprise. It’s a versatile acronym and suits many occasions.