Did you deliver bad news to someone? If they respond with ‘such is life,’ they probably don’t find it surprising. This post unpacks the meaning and origin of this expression.

The expression ‘such is life’ means to accept the unpredictable misfortune of existence. Typically, people will use the phrase with weary resignation, as if they never expected anything to work out in the first place.

It’s a way of displaying your apathy and disappointment at an outcome.

“What do you mean I didn’t get the promotion? Oh well, such is life. I suppose I was a fool for thinking I had a chance of receiving the position.”

“Such is life, my friend. You cannot expect things to work out when you have an attitude like that. You need to change your thinking to get better results.”

“This is so typical, but such is life. I should have expected you to fail miserably at it. Relying on you to do anything right is just too much to ask, right?”

“Why am I surprised? Such is life. I should have expected that things would take a wrong turn for us somewhere. Nothing ever goes right for me, ever.”

“Such is life. You never know what’s coming around the corner and what disaster awaits you next. It’s just part of the job and something you must learn to live with.”

“Such is life. What did you expect? If you don’t put in any effort, you can’t expect people to deliver for you. Let that be a lesson to you on how to treat your team.”

I wish things turned out different, but such is life. Maybe next time, it will go better, but right now, everything is a disaster. Let’s just let it go.”

“I heard they won’t reimburse us for the loss? Such is life. You can rely on the insurance companies to collect premiums, but they do their best to never pay you out when you need it.” 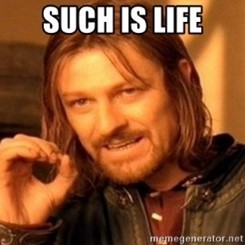 The expression ‘such is life’ originates from the mid-18th century. The first use of the phrase appears in ‘A Grammar of the Italian Language,’ published by Joseph Baretti in 1762. The book translates the phrase “Cosi va’l mondo!” as “Such is life.”

“Such is life that whatever is proposed, it is much easier to find reasons for rejecting than embracing.”

So, ‘such is life’ is another version of the French saying ‘C’est la vie,’ which translates to ‘life’s like that’ or ‘that’s life’ in English. The phrase retained its meaning over the next 500 years, a common English saying.

Phrases Similar to Such is Life

Phrases Opposite to Such is Life

Ways People May Say Such is Life Incorrectly

‘Such is life’ isn’t an enthusiastic phrase, and you’ll say it in a disappointed or neutral tone. Using it to describe happy reactions to pleasant surprises in your life is incorrect.

Acceptable Ways to Phrase Such is Life

You can use the saying ‘such is life’ when you want to say that that’s how things go. It’s a way of letting yourself down easily after receiving disappointing news. It’s also a way of showing indifference to what people say to you regarding specific topics. You’ll use the expression to show people that you have little interest in what they’re saying. The phrase suits social and professional use.

Use it at the office to describe your blasé attitude to failing to close a sale. Use it with friends when one of them gives you unsurprising news. ‘Such is life’ is a weary response, and you’ll usually say it when you’re feeling uninspired or handling bad news. ‘Such is life’ shows a lack of enthusiasm in your response and an attitude of complaisance or indifference.