Did you visit someone’s home overflowing with useless trinkets they like to collect? You could call them a ‘hoarder.’ This post unpacks the meaning and origin of this expression. 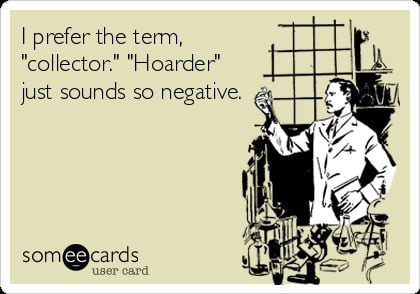 The expression ‘hoarder’ describes a mental health condition where a person collects useless items that mean something to them. For instance, the person may collect Lego pieces but not complete Lego sets, or they might pack huge quantities of old newspapers or magazines into their garage with no intention of using them in the future.

Typically, hoarders think of themselves as ‘collectors,’ and they don’t appreciate being called a ’hoarder.’ In most cases, the items have no value, but the hoarder assumes that they may have a goldmine on their hands as the ‘collectibles’ will rise in value over the years.

However, the reality is that they collect junk, and it’s doing nothing but taking up space in their home. A person with a hoarding disorder requires professional treatment to help them overcome the compulsive disorder of collecting junk.

“My Neighbor is a hoarder. She collects Beanie Babies under the assumption they’re going to be worth a fortune in the future. I don’t have the heart to tell her they’re worthless.”

“I had no idea you were such a hoarder. Do you ever throw anything away? This magazine is from 1986. You’ve obviously been at this a while.”

“A hoarder exhibits classic OCD behavior. It’s a form of mental illness, and the person is likely to develop other mental health issues like schizophrenia.”

“As a hoarder, I feel everything I collect has some value. My family thinks I’m just taking up space in the garage, but I see it differently.”

“Are you a collector or a hoarder? There’s a difference, you know. From where I’m standing, it looks like you’re a hoarder, and I think you need help.”

“Some people say that my prepping makes me a hoarder. When things go wrong in this country, we’ll see who was right after all.”

“Dad, my friend told me you’re a hoarder and belong in the mental asylum. What are they talking about? Are you sick or something?”

“I went over to Jeff’s house for a beer after work. That guy has a problem. He collects all the old Jack Daniels bottles he drinks. They’re all empty, and he must have hundreds of them sitting around doing nothing in his home.” 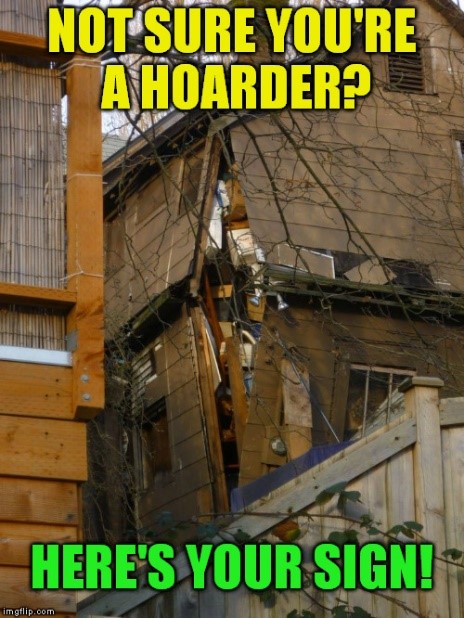 The expression ‘hoarder’ originates from the early 1500s. It comes from Middle English, with the first definition of the word appearing in 1513. The word’s first use appears in archaic English as ‘horder, hordere,’ ‘a keeper of a store of goods, or ‘hordere,’ meaning a steward, treasurer, or chamberlain.

The phrase retained its meaning over the centuries. However, the modern use of the term removes the nobility from the title, referring to it as a mental health disorder. Language experts cannot pinpoint when the phrase changed to its current meaning.

Phrases Opposite to Hoarder

Many people confuse ‘hoarders’ and ‘preppers.’ However, a prepper prepares by hoarding necessary items like food, guns, and ammunition. A Hoarder collects worthless things that have no benefit to anyone else but themselves.

You can use the term ‘hoarder’ to describe someone who has a compulsive behavior of storing items in their home or storage unit. Typically, hoarders collect items of little to no value.

For instance, the hoarder may have the compulsion to hoard old magazines or Mcdonald’s Happy Meal toys. It describes mental health disorder where the person can’t help their behavior.

The phrase suits social use. You could use it to describe your neighbor’s hoarding behavior and how she has no space left in his home for anything due to her habit of collecting junk. Typically, the use of ‘hoarder’ comes with a negative connotation. You’ll use it to describe someone exhibiting compulsive behavior.