Did someone call you a ‘jive turkey’ after you made an unbelievable claim? This post unpacks the meaning and origin of this expression.

The expression ‘jive turkey’ means someone overexaggerates things or makes outlandish claims they can’t prove. The jive turkey emulates this behavior in an attempt to gain attention.

Typically, jive turkey is an outdated saying, and people might laugh at you for using it in the modern lexicon when better insults are available.

A jive turkey pretends to be something they are not, and they lie about things to try and enforce their fake claims or persona. A jive turkey may claim they are rich or powerful, or they may spin stories that make them seem important, with no proof to back their claims. A jive turkey is someone that speaks with confidence but lies about their achievements.

“You can’t believe a word that jive turkey says. He never tells the truth, and he’s always trying to make himself look important in front of others.”

“That guy is a real jive turkey. Someone needs to shut him up and put him in his place. It’s not going to be me, but sooner or later, someone will have a confrontation with him.”

“Look, kid, you’re a jive turkey. You can’t expect me to believe what you just told me. That’s impossible for anyone to do. Just go home to your momma and leave me alone.”

“Listen here, jive turkey. You may think everyone is fooled, but I see right through you. I know when someone is telling lies, and when they’re telling the truth, you’re a liar.”

“Reggie is such a jive turkey. He’s always making big claims but never backs them up. It’s like he thinks no one will check his street cred. It’s going to end up getting him in trouble.”

“What a jive turkey. Can you fellas believe what this guy is saying? He’s telling me he fought Muhammed Ali in his early career and knocked him out.” 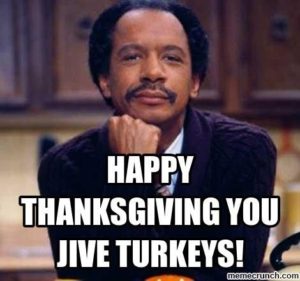 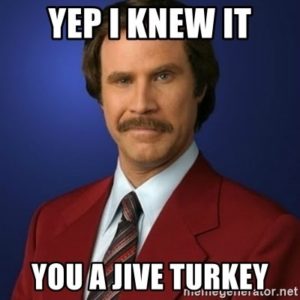 The expression ‘jive turkey’ originates from African-American slang in the early 1970s. The first use of the term in media was in the 1971 film Shaft,’ directed by Gordon Parks. Shaft was an icon of African-American masculinity during the early seventies, and he would use the term in the movie to describe someone he thought was messing him around.

Shaft carried themes of black empowerment, sexuality, masculinity, and racial overtones. The series was filmed in locations around New York City, including Times Square, Harlem, Greenwich Village, and other areas around Manhattan.

However, experts believe the 1980s TV show ‘The Jeffersons’ made the saying famous.

Phrases Opposite to Jive Turkey

Since the phrase was popularized in the 1970s, using it today means you’re speaking outdated slang, and Gen Zs and Millennials may not understand what you mean. The phrase has nothing to do with turkeys or dancing. It’s a way of calling someone out on their lies or outlandish behavior.

You can use the expression ‘jive turkey’ to describe someone that makes bold, unproven claims. They seem like they’re not telling the truth and might be pathological liars that inflate their self-worth. The phrase suits social communications in texts and verbal exchanges. However, it’s somewhat outdated and no longer has much use in society.

‘Jive turkey’ was originally a slang word created by African-American communities. It’s a derogatory term and may offend people who were socially active during this era. You’ll use the saying when referring to someone you know or a stranger.