Did someone tell you they are at loggerheads with their friend about where to go for dinner? What do they mean? This post unpacks the meaning and origin of this expression.

The expression ‘at loggerheads’ means that you are in a stalemate negotiation. Neither side wants to give in to the demands of the other, and there is no reasonable solution to bring to the table. It describes a dispute between two or more people or groups, with no one being able to see the other party’s side of the problem.

Being at loggerheads can have an aggressive or playful tone, depending on its context.

“The manager and the sales team are at loggerheads on the new CRM. No one wants to learn how to use it, but the manager says they can’t go back to the old sales system.”

“Are you two at loggerheads again? Can you ever agree on anything, or are you always at each other’s throats with every decision you make?”

“The parties are still at loggerheads on what to do about the situation. It looks like they can’t resolve to give each other any room, and it’s not getting us anywhere with this.”

“We’re at loggerheads and have no idea how to get around this problem. The other side blocks every suggestion we make, and we do the same to them. This is a pointless negotiation.” 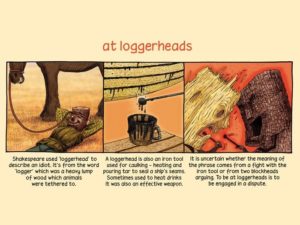 The expression ‘loggerheads’ originates from the United Kingdom. While it’s also the name of a turtle and bird species and a location, it’s also an idiomatic expression describing a stalemate.

The first use of the expression is in William Shakespeare’s ‘Love’s Labours Lost,’ performed in 1588. However, the word refers to a stupid person in the context of the play.

“Ah, you whoreson loggerhead, you were borne to doe me shame.”

The first appearance of the phrase with its modern meaning of being in disagreement occurs in ‘The English Rogue,’ published by Francis Kirkman in 1680, where it appears as follows.

“They frequently quarrell’d about their Sicilian wenches, and indeed… they seem… to be worth the going to Loggerheads for.”

In 1681, the publishing of ‘The Arraignment, Trial, and Condemnation of Stephen Colledge’ shows a relationship between loggerheads and disagreement.

“So we went to loggerheads together. I think that was the word or Fisty-cuffs.”

‘Loggerheads’ also refers to the name of three towns in the UK.

Phrases Opposite to Loggerheads

The word ‘loggerheads’ has nothing to do with loggerhead turtles. It’s also not a way of describing a lumberjack. Loggerheads mean you’re at a stalemate, and you can’t find a common solution that works.

You can use the term ‘loggerheads’ to describe when you can’t come to terms with another person or party. You can use the phrase in professional and social situations. For instance, you could use it at work to describe how you and the creative director are at loggerheads on the right design style for the project. You could use it at home to explain how you and your partner are at loggerheads over where to go for the family vacation.

Being at loggerheads means you can’t find a winning solution with another person. It’s a common political term describing how parties can’t come together and make a common decision on something. You can use ‘at loggerheads’ to describe resistance from both sides, but not with malicious intent.