Are you looking at a t-shirt with the acronym ‘LGBFJB’ on the front? What does it stand for? This post unpacks the meaning and origin of this expression.

The expression ‘LGBFJB’ is an acronym for ‘Let’s go, Brandon, F**k Joe Biden.’ LGB and FJB are independent acronyms people formed together to make the extended version ‘LGBFJB.’ The phrase is a common expression on social media with Trump supporters.

The phrase ‘LGBFJB’ means that people are tired of Joe Biden’s policies and feel it’s time for a change in leadership in the White House. People who use the phrase are usually Trump fans and want to see ‘The Donald’ back in the Oval Office.

“Joe Biden allegedly has a connection to a Ukraine energy company through his son, Hunter Biden. A reporter published a conversation where Hunter was to ‘take ten for the big guy.’ I wonder what that means? LGBFJB.”

“I wonder how much influence Lockheed Martin has at the White House? All these weapons going to Ukraine must come from somewhere, and the taxpayers are footing the bill. LGBFJB.” 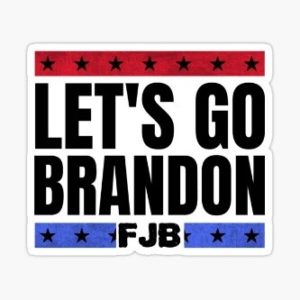 The acronym ‘LGBFJB’ originates from a NASCAR race in October 2020. A reporter interviewed Brandon Brown, the 28-year-old driver and event winner. Brandon won his first Xfinity Series event, with the crowd chanting behind him during the interview.

The interview went viral, with Trump supporters turning it into a meme on TikTok. People would lip-sync the words ‘Let’s go, Brandon, f**k Joe Biden’ to a song created by Loza Alexander. Since Loza is an African-American, the trend went viral, and the left couldn’t denounce it as racism.

TikTok experienced thousands of users posting videos of them dancing and lip-syncing to the song. The term LGBFJB is a calling card for the right-wing, and it’s used to voice disdain for Biden’s policies.

‘LGB’ and ‘FJB’ are two acronyms that mean the same thing. You can use them interchangeably and independently of each other. However, it’s more common for people to post the abbreviation as ‘LGBFJB’ and not ‘FJBLGB.’

You can use the acronym ‘LGBFJB’ when you feel like voicing dissent at the 46th president of the United States, Joe Biden. This acronym appears on social media platforms like Twitter and Instagram around the times that Biden makes policy speeches. It’s a way of voicing concern and disapproval over Biden’s policies.

Joe Biden is the most unpopular president in the history of the United States. Touted as the savior of America to rid the country of the scourge of Donald Trump, Biden has failed democratic voters and the American public as a whole. Posting ‘LGBFJB’ on social media gives you a platform and a voice to be heard.