Did someone you follow on social media just follow you back? You could say you’re ‘mutuals.’ This post unpacks the meaning and origin of this expression.

‘Mutuals’ can describe platonic and romantic relationships, but it usually refers to the platonic kind. In some cases, ‘mutuals’ can apply to two influencers following each other to leverage each other’s audiences and gain clout on the platform.

Some people may use ‘mutuals’ to describe sycophantic behavior on social media where two people will agree with each other regardless of the topic. They will back each other up on issues, even if they know, they are wrong.

The term ‘moots’ is a shortened version of ‘mutuals,’ but it’s less common to see it used on social media these days.

“These guys are Twitter mutuals. It’s sad to watch grown men agree with each other about everything. You think social media would breed a healthy difference of opinion, but I guess not.”

“Don’t try and troll him on social. He has an army of mutuals, and they’ll relentlessly attack you if you say anything negative towards him.”

“I love my mutuals on social. They make it fun to use the platform, and we all are interested in what’s going on in each other’s lives.”

“Mutuals on social media are nothing more than echo chambers. If you want real advice, ask a friend, not a mutual. They’re sycophants that just agree with whatever you say.”

“If you follow me, I’ll follow you back. Now we’re mutuals! It’s great to be part of a like-minded community, and I feel we have a real relationship with each other online.”

“Wow, Neil De Grasse Tyson just followed me on Twitter! Now we’re mutuals! I’m going to send him a DM to say thanks.”

“I thought we were mutuals, but you just unfollowed me. So, I’m going to unfollow you too. Call it a mutual falling out between us.” 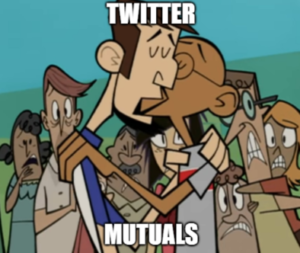 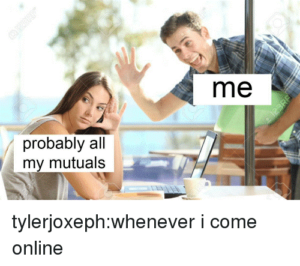 The expression ‘mutuals’ originates from social media, particularly the Twitter platform. The term’s first appearance was in 2007 when Twitter users defined it as someone you follow that follows you back. It was one of the first terms unique to the platform, appearing shortly after its launch.

Some people refer to mutual followers as ‘moots.’ It’s an older term defining a mutual follower but died out in 2010, with ‘mutual’ becoming the more popular term. Twitter users still post the word and use it with its original meaning.

‘Mutuals’ spread to all other social media platforms over the coming years. Now it’s a popular term used on all social media sites to describe people that follow each other.

Phrases Opposite to Mutuals

The phrase ‘mutuals’ doesn’t refer to mutual funds or other investment vehicles. It’s a way of describing online relationships on social media.

You can use ‘mutuals’ to describe your mutual followers on social media. It’s a social term used to describe those accounts following you that you follow back. If you’re ‘mutuals,’ it means you both interact and respect one another and like and share each other’s content with your followers online. There is mutual respect between you, and you both want to see each other succeed.

The term applies to all social media platforms, including Twitter, Facebook, Instagram, TikTok, and Snapchat. Men and women can be ‘mutuals,’ and it’s not a gender-specific term. You can also use ‘mutuals’ to describe social media users that gang up with each other to troll other people they don’t like online.