Are you looking at Clash Royale memes online? You’ll probably come across the ‘nerf miner‘ meme sooner or later. This post unpacks the meaning and origin of this viral trend.

The expression ‘nerf miner’ refers to memes from the Clash Royale community regarding the ‘Miner troop‘ requiring ‘nerfing‘ due to overpowering other game elements.

‘Nerf miner’ is used in genuine and fake pleas for the game developer, SuperCell, to nerf the miner troop. There are several ‘shitposts‘ about the meme, with many of them mocking people that support the request to nerf miner troops.

They could say the miner troop isn’t nerfed enough or that it’s nerfed too much. The Miner troop experienced several nerfs since it was added to Clash Royale. The saying experienced a boost in use and popularity on the social media platform TikTok in early 2022.

It appears as a spam comment on TikTok, with users commenting on unrelated videos to Clash royale, usually with heavily emotional topics, such as a person dying from cancer. In this sense, the term is sued as a troll of the other video creator.

“Please, for the love of everything holy in this game, nerf miner! If you don’t do it, I’m leaving, I swear. Make it happen, or there will be a mass exodus.”

“Please, nerf miner. No, wait, he’s already been nerfed too hard. There’s no way we need to nerf miner again, or it will swing balance the other way.”

“There’s no reason for you to nerf miner again. Stop it; you’re overdoing things, and it will ruin it for everyone.” 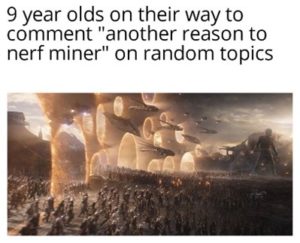 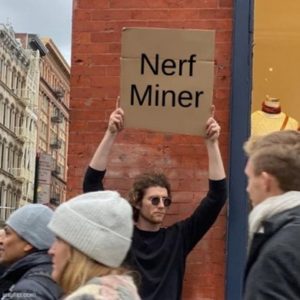 The expression ‘nerf miner’ originates from the Miner troop card added to the online game Clash Royale in 2017. The Miner is the only troop with a placement available anywhere on the playing field after summoning. It’s the most useful troop for planning attacks on enemy towers.

Shortly after adding Miner troop to the game, users on the r/ClashRoyale subreddit posted, suggesting that the Miner troop is overpowered. The users requested the game developer, ‘SuperCell,’ to ‘nerf’ the troop.

In late 2021, the ‘nerf miner’ meme spread to the social media platform TikTok. TikTokers produced ironic videos highlighting the reasons for SuperCell to nerf the Miner troop. Some users would comment on unrelated videos to Clash royale, using ‘nerf miner’ as a type of troll.

Phrases Opposite to Nerf Miner

The phrase ‘nerf miner’ has nothing to do with nerf guns. It refers to ‘nerfing’ a task on the game ‘Clash Royale.’ Using the phrase to refer to anything outside the game is incorrect unless you’re trolling people on social media.

You can use the phrase ‘nerf miner’ as a hashtag or comment on TikTok when discussing Clash Royale and the Miner troop. It’s also a popular term found in the subreddit r/ClashRoyale, discussing the need to nerf the miner troop. Some users on social media may use #NerfMiner to comment on serious posts involving people dying from cancer as a way to bring comedy to the situation with their troll.

‘Nerf miner’ is a term used by Millennial and Gen Z players of ‘Clash Royale.’ Boomers won’t understand what the phrase means.