Did you receive the acronym ‘NGL’ in a text message from a friend? What are they referring to? This post unpacks the meaning and origin of this expression.

The acronym ‘NGL’ means “Not Gonna Lie.” It’s a versatile saying in text communications, forums, message boards, and chatrooms. The most common meaning of ‘NGL’ is to indicate vulnerability or honesty.

However, the connotation and tone of the expression can change depending on the context of its use.

You could use ‘NGL’ to insult another person, display your emotions around something, or share an honest opinion. In most uses of the acronym, people will share their opinion, making it similar to the abbreviation ‘IMO’ (in my opinion) or ‘IMHO’ (in my humble opinion).

However, ‘NGL’ may act as a conduit for flattery, insults, or rudeness. It suits text-based communications, and you’ll use the entire phrase ‘not gonna lie’ in verbal conversations. It’s also common for people to lie right after using the acronym.

You man, NGL, I was walking through the city the other day, and I saw these two guys straight rob this girl right in front of me. It was a wild experience to witness.”

“There’s no way we can make it by 12pm. NGL, bro, even if I drive at top speed the whole way there. We just don’t have enough time.”

“NGL, I don’t think there’s any reason why you need to waste your money on it. I know three other people who tried and said it was a waste of time, effort, and cash.”

“Well, NGL, bro, I thought you would take this badly. I’m glad to see you manned up and accepted defeat.” 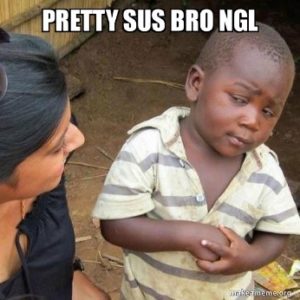 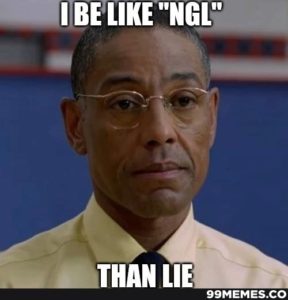 The acronym ‘NGL’ originates from the texting culture in the late 2000s. During the time before iPhones, people had to type messages on their phones using the number keypad.

It took so long to type messages that people started making abbreviations for commonly used terms. ‘NGL’ was one of the later generations of abbreviations, inspired by street slang in cities like New York and LA.

The first entry of ‘NGL’ into the Urban Dictionary was in 2009. However, its believed it was in widespread use well before this entry. ‘NGL’ is a popular abbreviation, and many people use it in text communications.

Phrases Opposite to NGL

Some online resources state that ‘NGL’ may have a racist connotation and meaning. While there is evidence of people using it for these purposes, it’s not the common reference for the term. ‘NGL’ stands for ‘not gonna lie,’ and nothing else.

You can also use the expression with an ironic or sarcastic connotation. For instance, you say ‘NGL’ and immediately lie about what you were saying you wouldn’t lie about. It’s a popular term in texting, and most millennials and Gen Zs understand the acronym’s meaning.