Are you looking for a pet name for the man in your life? You can stroke his ego and call him your “Papi.” This post unpacks the meaning and origin of this expression.

The expression “Papi” comes from the Spanish word for “father.” However, it has a different meaning in English conversation. “Papi” is a slang term for “daddy,” with a sexual connotation from the speaker to their “Papi.”

The saying is more common in Puerto Rico, the Dominican Republic, and the Caribbean. However, it’s well understood in the United States, and many women use it, even if they don’t have Latin-American heritage.

It’s a term of endearment similar to calling your partner “baby.”

“Oh Papi, when are you coming home? I miss you, and I want to be with you. Being apart like this is torment to my soul.”

“My Papi takes me everywhere. He spends money on me, and he treats me like his queen. I couldn’t ask for a better man in my life.”

“Papi, do you think you could give me a hundred dollars? I’m going out to lunch with the girls, and it will be pricey.”

“Oh, I love how you treat me, Papi. I would do anything for you, and you have my love forever. How can I make you happy?”

“My Papi takes care of me. If I need anything, all I have to do is pick up the phone and call him. He is there for me whenever I need him.”

“You need a Papi in your life, girl. Trust me, with a man showing you what to do, you’ll never have any problems again.” 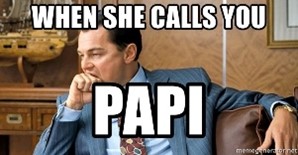 The expression “Papi” originates from Spanish, but the singer/actress Jennifer Lopez was responsible for bringing it into mainstream use in English. The talented artist released the song “Papi” in 2011, and the rm quickly grew in popularity due to Jennifer’s good looks, massive fanbase, and impact on culture.

Since every man alive has the fantasy of being with Jennifer Lopez, it became an ego-trip for men to have their girlfriends call them “Papi.” The term is also frequently used by women looking to get something from a man.

However, the oldest use of the term in modern English comes from the baseball player David Ortiz. Ortiz would call his teammates “Papi” as a replacement for “pal” or “buddy.” The Dominican star made the term popular during his stint with the Red Sox in 2002, eventually earning him the nickname “Big Papi.”

It’s a common saying today for women to use when referring to their man. The first use of the term in this context appeared in the Urban Dictionary in 2003.

Phrases Opposite to Papi

The term “Papi” means “father” or daddy. However, it might not be appropriate for your daughter to call you Papi. The expression can have a sexual connotation, and using it might get you some strange looks from people.

You can use “Papi” if you’re a female referring to your lover or husband. It’s a term of endearment showing the man that they hold power in your relationship. It’s a way of making your man feel important and like they have some sort of command over you. When you’re at home or with friends, you can use the phrase to show your partner you love and respect them.

The word “Papi” is the Spanish term for “daddy,” and it has a sexual connotation when used in English and Spanish conversation. So, using “Papi” in the bedroom as a replacement for “daddy” would be appropriate. You don’t have to be Spanish or be talking to a Spanish man to call them papi. The word can apply to men of all ethnicities and be used by all women.