Are you a trans person only interested in dating other trans people? Remember to add ‘t4t‘ to your bio on your favorite dating site. This post unpacks the meaning and origin of this term.

The acronym ‘t4t‘ is an abbreviation of the term ‘trans4trans.’ It means you’re a transgender person and only interested in dating other trans people.

This term appears on dating sites like Craigslist Personals and many other dating platforms dedicated to trans people and the LGBTQI+ community.

Some political pundits and gender identity activists state the term ‘t4t‘ is somewhat exclusionary, leaving out the possibility of other sexual identities contacting the person. Ironically, this separatism is the opposite of the inclusivity promoted by the LGBTQI+ community.

Due to the separatist nature of the term, it runs the risk of identity policing, prioritization of sexual identity over others. It promotes a lack of inclusivity, but rarely gets pointed out in media.

“What does it mean when someone posts’ t4t’ in their dating profile? Are they trans? Can I ask them out if I’m a straight person, or will they reject me?”

“This dating profile has ‘t4t’ in it. That means they’re a trans person that’s only into trans people. If you’re straight, they don’t want anything to do with you.”

“If you’re a transgender sexual identity, and you want to date other trans people, make sure you put ‘t4t’ in your profile.”

“Trans people deserve to choose who they want to date. They have the same rights as everyone else. If they want to put ‘t4t’ in their bio, that’s their business and none of your concern.” 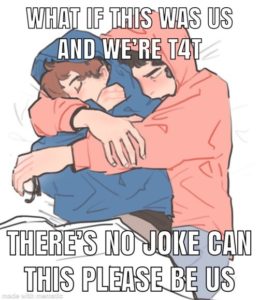 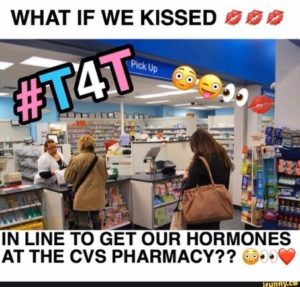 The term ‘t4t’ originates from the gender equality movement that started in the 1990s. During the 90s, people weren’t very inclusive of other gender identities other than straight. The ‘LGBT’ community started campaigning around this time, pushing for equal rights for Lesbian, Gay, Bisexual, and Trans people.

The term ‘t4t’ or ‘trans4trans’ appeared in the early 2000s on Craigslist personals. People would use the term to let people know they were transgender and only interested in dating other trans people. However, the concept of a trans4trans relationship isn’t new.

Michael Dillion and Roberta Cowell were the first celebrity couple to have a public ‘t4t’ relationship in the 1950s.

Phrases Opposite to t4t

The ‘t4t’ acronym is somewhat ironic. Trans people fought for equal gender rights, and using ‘t4t’ segregates the field of potential suitors to trans people only. If you’re not a trans person, using the term ‘t4t’ in dating apps could land you in trouble with the woke mob.

You can use the acronym’ t4t’ if you’re a transgender person looking for another trans person online. The phrase usually appears in dating apps, setting the person’s criteria for a partner. The word also appears on forums, message boards, and charts like Reddit, Twitch, and 4Chan. If you’re browsing a dating website and see ‘t4t’ in a bio, you’ll need to be trans to message them.

The term ‘t4t’ suits social interactions between trans people. You can use it in text conversations when someone asks you what you’re looking for in a prospective partner. The term has no professional use.