Did someone tell you they identify with the ‘trixic’ sexuality type? What does this mean in the context of the LGBTQ+ community? This post unpacks the meaning and origin of this expression.

Orbisian appeared on Tumblr around the same time as ‘trixic,’ and it’s unclear which identity was first. However, both terms are accepted equally by the LGBTQ+ community and have the same meaning.

Both trixic and orbisian refer to non-binary individuals with romantic or sexual feelings towards women. However, there are right-wing individuals that point out these terms are nothing more than an integration of lesbian or straight.

The ‘trixic’ identity is gaining traction on Discord servers and other platforms dedicated to discussing the identity. The sexual identities of orbisian and trixic gained attention online, becoming terminology describing enby people attracted to women and other genders.

A non-binary individual identifying as a ‘trixic’ will use the following pronouns.

“You’ll know you fit with the ‘trixic’ sexual identity if you’re a non-binary person and you find yourself attracted to women.”

“Someone told me about this sexual identity called ‘trixic.’ It’s where a non-binary person is attracted to a woman. Isn’t that the same as being straight or lesbian?”

“Trixic people are interesting and one of the most curious sexual identities out there. They are non-binary individuals finding themselves attracted to women.”

“Can a gay man identify with being ‘trixic?’ Wouldn’t that make him straight? There’s so much confusion in identity politics. I wish someone would clear it up for me.” 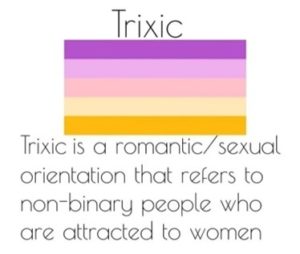 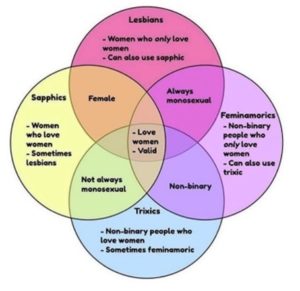 The sexual identity ‘trixic’ originates from the social justice movement around gender-based equality for all sexual preferences. The ‘trixic’ identity appeared on Tumblr and as a Discord server in 2017. It’s one of the more new sexual identities surrounding non-binary people.

The term ‘trixic’ possibly emerged from the ‘orbisian’ sexual orientation, and many people see it as the same identity. Shortly after its founding in 2017, the meaning of ‘trixic’ was altered to include feminamoric and non-feminamoric sexual preferences.

Some people may confuse the ‘trixic’ sexual identity with other identities, such as ‘neptunic.’ However, trixic is an independent sexual identity relating exclusively to non-binary people. Trixic people are not always feminamoric.

You can use the sexual identity term “trixic’ when referring to a non-binary person that has an attraction to women. These people may like any type of female with any other sexual orientation. Trixic sexual identities are also referred to as orbisian, and trixic people are sometimes feminamoric.

You can use ‘trixic’ when you’re commenting on social media posts from ‘woke’ people that discuss identity politics surrounding people’s sexual identity. Less than 5% of Americans consider themselves as part of the LGBTQ+ community, and fringe identities like ‘trixic’ are a small percentage of those individuals.