Are you watching a gymnast make a horrible landing at the Olympic games? They could be dealing with a case of the ‘twisties,’ affecting their performance on the mat. This post unpacks the meaning and origin of this expression.

The expression ‘twisties‘ refers to a gymnast’s loss of coordination and balance, resulting in changes to their performance on the mats and equipment. Gymnasts describe the feeling of the twisties as being lost in the air when they make a jump.

Athletes cannot complete tasks and use their skills to their normal ability. It’s a mental performance problem experienced by gymnasts, particularly at the top level of the sport. The twisties are a psychological condition, and the athlete must push past them to recover their skills.

Some gymnasts may never recover from the twisties or incur a severe injury in training or competition when attempting to push through it.

“Look at Simone Biles; she’s crushed. I can’t believe she missed that. She’s always so perfect. I wonder if she’s dealing with the twisties.”

“That poor girl been struggling with the twisties. She took that vault today, landed wrong, and broke her neck. Now she’s paralyzed for life. Such a shame.”

“The twisties are a real thing. I had them earlier in my career and got a bad shoulder injury after a fall. I hope I never have to deal with them again. They’re nasty.”

“It can take days, weeks, months, or even years to get over the twisties. Some athletes find they can never return to their previous form.”

“A case of the twisties can ruin a gymnast’s career. One day they’re on top of the world, and the next, they can’t land the most simple jumps.”

“If you have the twisties, you need to take some time off and let the nervous system reset. It’s usually a psychological problem, not a physiological issue.”

“I wonder how many Olympic gymnasts come down with a case of the twisties during their career? I bet it’s a lot of them. I wonder how they overcome it?”

“Hey, pass me those chicken twisties, bruh, those things are the bomb. These Australians know what they’re doing with these things.” 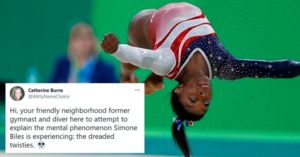 The ‘twisties’ is an expression originating from the sport of gymnastics. Australian immigrant Isador Magid coined the term in 1951 to describe how a gymnast loses control over their coordination, resulting in poor performance in competition and at practice.

However, it wasn’t until the 2020 Olympics that “the twisties” became a household phenomenon in the United States. American gymnast Simone Biles Famously caught a case of the ‘twisties’ during her performance at the Olympic Games in Tokyo.

Simone, a former multi-gold medal winner, lost her coordination, sidelining herself for the rest of the tournament. Simone went on to explain that she wasn’t allowed to bring her medication into Japan, resulting in changes to her brain chemistry and poor performance.

Phrases Opposite to Twisties

The twisties are a unique condition for gymnasts. Many people confuse the twisties with the ‘yips,’ a similar condition experienced by golfers. While the yips and the twisties have identical characteristics, such as a loss of coordination in the athlete, it’s easy for people to confuse the names of the terms.

You can use the expression ‘twisties’ to describe a gymnast that seems to lose its form. The athlete may appear confused with how they handle space and movement, and they may also sustain an injury in competition or practice due to a mistimed jump.

The phrase suits social use in situations where you’re talking about gymnastics. The twisties are unique to gymnastics and only occur in this sport. Other sports, like golf, may have a specific reference to similar conditions experienced by their athletes.