Did someone tell you the sky’s the limit after you asked them what’s possible with the price of Bitcoin? This post unpacks the meaning and origin of this expression.

‘The sky’s the limit’ means that there is no limit. It’s a way of saying that you have untapped, limitless potential. The phrase can refer to actions or results, which means you can achieve success beyond your expectations.

The sky’s the limit means that anything is possible.

“Your teacher is wrong. The sky’s the limit. You have a great education, good grades, and the whole world in front of you. She’s just probably got something personal against you.”

“I’m telling you, the sky’s the limit for this project. A crypto casino will make us millionaires, and it’s beyond your wildest dreams.”

“The sky is the limit. You’ll keep progressing as long as you keep training and putting in the effort. I know athletes that are only peaking at 50. Just look at Kelly Slater. He’s the GOAT.”

“Where is the limit is this organization? The sky’s the limit. It’s about how much time and effort you put into your job and the results you deliver for the team.”

“The sky’s the limit. Only you can determine where your career goes and what path it follows. You’re one of the most talented college athletes and have an exciting life ahead of you.”

“When it comes to our tolerance of the Democrats and their antics, the sky’s the limit. We have no agenda here, and there’s nothing we can do to stop it. Conservatives are weak.” 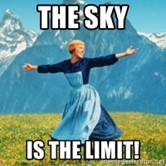 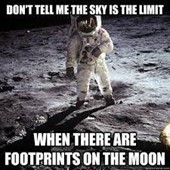 The expression ‘the sky’s the limit’ originates from the card game poker. The first use of the phrase appears in ‘The Illustrated Buffalo Express’ on 11th September 1898.

Horace Greeley describes his friend, Prof. A. T. Parker, referring to him as “the Nestor of trout fishing and the maker of the finest trout and bass flies in this country.”

He goes on to say the following.

“In 1850, he made a trip down the Mississippi on the Eliza, the fastest boat on the river, and saw a poker game with a sky-high limit going on in one end of the boat.”

The first use of the proper modern phrase is in an article in ‘The Philadelphia Inquirer,’ published on the 18th March 1900, which reads as follows.

Wheat Speculator Wins It With Display of Nerve and Two Sevens

A bluff that worked

The Sky the Limit in His Fierce Struggle With the Cards”

Phrases Similar to The Sky’s the Limit

Phrases Opposite to The Sky’s the Limit

Ways People May Say The Sky’s the Limit Incorrectly

The phrase ‘the sky’s the limit’ applies to the potential on offer from another person, event, or process. However, it is technically incorrect as the sky is not the limit. Using the phrase is an irony in itself, but it’s a popular inspirational quote, and you likely hear it all the time.

Acceptable Ways to Phrase The Sky’s the Limit

You can use the phrase ‘sky’s the limit’ when you want to iterate that there is no limit on what’s possible. You could be referring to a task, goal, or project results. The expression suits social and professional use.

Use it at work to describe new employees’ potential to rise to the C-suite. Use it at home to explain how the right education leaves you with more prospects in the job market. ‘The sky’s the limit’ means that there is no limit. You can use it as a motivating statement to remind yourself or others that you can achieve your wildest dreams.