Did your professor tell you to put on your thinking cap for the upcoming lecture? This post unpacks the meaning and origin of this expression.

The expression ‘thinking cap’ means to intensely focus on your thoughts. Typically, people will use the ‘thinking cap’ to describe how they must contemplate a subject deeply before making a decision. It’s a way of telling someone they must put serious thought into something rather than make a rash decision.

If someone tells you to put on your ‘thinking cap,’ they want you to give the topic of discussion serious thought. It means that you must spend time mulling over a decision, plan, or strategy to improve or refine it to perfection.

“I don’t know what to do about it right now. I’ll have to put on my thinking cap and consider it seriously later.”

“It looks like you have your thinking cap on, son. What seems to be the matter? Is there anything I can help you with working out?”

“It’s best for you to put on your thinking cap and contemplate it for a while. It’s not something you can just decide on right away without a decent amount of consideration beforehand.”

“I have to choose between Harvard or Yale for college. I better put on my thinking cap and decide which school is the better choice for my higher education.”

“There’s no need to put on your thinking cap. This isn’t a challenging situation to consider. Just make a choice and stick with it, and you’ll be fine.”

“We all need to put on our thinking caps for a minute. Let’s see if we can brainstorm some ideas about this without it getting out of hand.”

“I think you must put on your thinking cap and work this out yourself. My input on the matter is useless to you. You’ll have to figure things out yourself.” 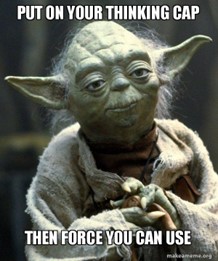 The expression ‘thinking cap’ originates from the book ‘Foole upon foole, or, Sixe sortes of Sottes’ written by actor and comic Robert Armin in 1605. The original use of the term was ‘considering cap,’ appearing in his work as follows.

“The Cobler puts off his considering cap, why sir, sayes he, I sent them home but now.”

The first use of ‘thinking cap’ appears in an article in the Western Carolinian newspaper in October 1821, which reads as follows.

“We advise the editor to put his thinking cap on before he hazards another such assertion.”

‘Thinking cap’ also appeared in ‘To Peter Pensive,’ a piece published in ‘The Enniskillen Chronicle’ in November 1824, where it reads as follows.

“and if thou art not wise enough to take a hint from these proverbs, thou mayest put on thy thinking cap again to guess at my intentions.”

Phrases Opposite to Thinking Cap

A ‘thinking cap’ is not a real piece of headwear. It’s an imaginary object referring to your concentration and focus. If you’re wearing a thinking cap, you’re lost in thought. People use it to describe thinking in depth about complex problems at work or in life.

The expression ‘thinking cap’ suits social and professional use. Use it at work when you want to describe how you need to think deeply about a project and how to plan it out. You could tell your kids to put on their thinking caps when doing homework. The phrase suits text-based conversations and verbal exchanges.

You can tell someone to put on their ‘thinking cap’ when they face a challenging problem that requires thought and focus. If someone is wearing a thinking cap, it’s challenging to catch their attention because they are focused on solving a problem or contemplating an outcome or event.