Are you looking for a way to send off a friend from the military services? You could use “till Valhalla” as your final goodbye to them. This post unpacks the meaning and origin of this expression.

The expression “til Valhalla” means you will see the other person in the afterlife. It’s typically a saying used by members of the armed services when uttering their final words at a funeral. Usually, the words inspire emotions, and it’s the same thing as saying “see you in heaven” to someone.

However, “til Valhalla” has a special combat meaning to it. It has a connection to a warrior code from the days of the Vikings, and it’s not a phrase you would use to send off someone with no combat experience.

The expression can also act as a rallying cry before heading into battle. The term inspires courage and confidence in people, letting them know not to fear death but embrace it in combat.

“He was a good man. A father, a brother, and a soldier. May you rest in peace, my friend. We will meet again in the afterlife. Til Valhalla.”

“Sargent Martins was an exemplary police officer and an outstanding community member. He will be remembered as one of the greatest men to wear a uniform. Til Valhalla.”

“Rest now and forever hold your peace. You are no longer of this world, and you belong to the hall of the slain. Til Valhalla my friend.”

“We have reached the end of the rope here, my friend. There is no going back, but we’re not going to make it out of this alive. Let’s go down in a blaze of glory. Til Valhalla.”

“There is no escape, and are backs are against the wall. Til Valhalla, then. If it’s what we have to do, then so be it.”

“I heard another three veterans committed suicide over memorial day weekend in California alone. Til Valhalla, I hope they find peace in death.” 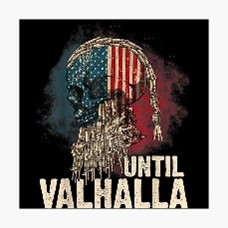 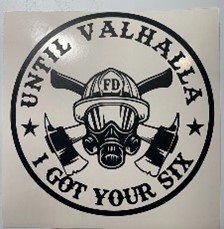 The expression “til Valhalla” originates from Norse Mythology. Valhalla (Valhǫll) is a hall filled with warriors and the most revered place in Asgard, the realm occupied by Odin and the other Norse gods.

Odin is the god of war, and he built Valhalla to honor Vikings that died in battle defending the Norse nation. Dying in battle was considered to only way for a warrior to die if he wanted to earn the respect of his peers and have a shot at entering Valhalla.

Warriors that die and enter Valhalla are the chosen ones that will fight at Odin’s side in the final showdown “Ragnarök.” It’s a similar concept to the apocalypse in Christian legend.

Phrases Similar to Til Valhalla

Phrases Opposite to Til Valhalla

The phrase has more of a military edge to it. Using it to describe “going to heaven” wouldn’t be ideal for civilians as they have no military background. The phrase is better suited for people with a combat-orientated or military mindset or obeying a warrior code.

Acceptable Ways to Phrase Til Valhalla

You can use “til Valhalla” as a parting greeting between friends or as a battle cry before taking a risky action or assignment.

It’s a way of saying that you’ll see the other person soon or see them in the afterlife. You could use “til Valhalla” when paying your final respects to someone at their funeral. This context would mean that you will see them in heaven.

The term has a warrior or battle theme, so it would be suitable for addressing people from the military, such as active service people or veterans. If a veteran you knew from your time in the armed forces died, you could say “til Valhalla” when you hear the news and wish to make peace in your mind.