Are you looking at a meme of a sad Pepe the Frog? It’s the “sadge” emote, popular on the BetterTV and FrankerFaceZ emote apps on Twitch. This post unpacks the meaning and origin of this expression.

The meaning of the emote “sadge” is content or comments that make you “sad” and “cringe” at the same time. The word is a combination of these two. It serves situations online that makes you feel uncomfortable and depressed at the user making the comments or posting the content.

The “sadge” emote on Twitch is a version of the original “Pepe the Frog” meme, and it features Pepe with a sad, long face, sometimes with a tear in his eye. If you’re posting the sadge emote in chat, it’s because someone said something depressing and cringeworthy in one comment.

In some cases, the sadge emote on Twitch is suitable for voicing your anger or surprise at something sad happening. An example might be the canceling of your favorite streamer or TV show. Generally, the emote follows others people’s thoughtless comments, and it’s a way to voice your opinion about their choice of content.

“That content is proper sadge. I can’t believe I wasted two minutes of my life scrolling through it. Please do better.”

“This is sadge. I’m logging off right now, and I’m going to cry myself to sleep in the shower. Is anyone with me on this?”

“Man, why the sadge face, bro? Don’t go posting this nonsense online; it makes you look weak and pathetic.”

“The last thing you need is everyone to peg you as the sadge guy. If you want to post that kind of content, be prepared for the backlash.”

“I can’t stand reading through sadge content. It makes me depressed and cringe at the same time. Is there anything worse than that?”

“Do we have to go through this now? This is nothing but sadge reactions and cringey content. Let’s skip it and say we looked at it anyway.” 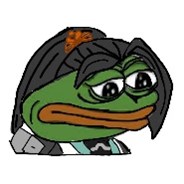 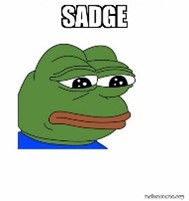 The expression “sadge” originates from the creation of “Pepe the Frog” by Matt Furie. “Pepe the Frog” is a popular internet meme created in 2005, debuting on Furie’s MySpace page. 4Chan users found Pepe in 2008, and the frog became an instant internet classic meme, with Pepe featured in various emotional states and doing different actions.

Twitch picked up the mem only a year later, adding it as an emote on the platform. The user “MonkaSenpai” was the first to upload the emote to Twitch under the “MonkaS” emote. The success of the emote lead to adaptations like the “MonkaHmm” and “Pepega” emotes, all featuring Pepe in some manner.

In early January 2020, the Twitch user “Redshell” uploaded the “Sadge” emote to BetterTV, and the FrankerFaceZ browser added it six days later.

Phrases Opposite to Sadge

You can use the word “sadge” to describe sad and cringy content. Using it to comment on depressing content is incorrect if it doesn’t have a cringe element. While the phrase can describe posts or comments that make you angry, it’s more common in content with sad and depressing cringe themes.

The expression “sadge” is suitable for online use in chatrooms, forums, and message boards. The phrase is common as the caption in memes, and you’ll use it to describe content or replies in chat that is both cringy and sad. Posting the meme is voicing your disapproval and sadness at the content while saying it makes you cringe.

The phrase is common on sites like 4Chan and Reddit, and it’s also a meme emote included in the FrankerFaceZ emote browser. You can use it whenever you find content or chat comments that make you angry or sad and have a cringy element.