Did a friend sign off their text message with big ups? This post unpacks the meaning and origin of this expression.

The expression ‘big ups’ is an acknowledgment of the other person you’re talking to in the conversation. You can also use ‘big ups’ when addressing crowds. Typically, ‘big ups’ serves as a modern method of providing someone with ‘kudos’ for their work.

If you say ‘big ups’ to someone, you’re showing them a sign of respect and that you appreciate the role they play in your life. Big ups are similar to a shout-out when used as a term of acknowledgment. When used to praise someone, ‘big ups’ are akin to words like ‘props’ and ‘kudos.’

You can use ‘big up’ at the beginning of a sentence as a sign of respect to others or as a closing remark to your conversation to show the other person you respect them.

“I was watching the Ali G show where he interviews the FBI. Man, it was so funny, he leads them along by the nose, and they don’t even realize he’s trolling them. Big ups Ali G!”

“Thanks for coming around for the game. It’s good to have someone here to share it with me. Big ups, my friend.”

“Big ups to the people that helped out with the fundraising event this weekend. We smashed our goals and have enough funds to get the blankets for the dogs at the pound this winter.”

“I just want to say ‘big ups’ to everyone that attended today. This event wouldn’t be the success it is without each and every one of you. Thanks for coming.”

“Big up yourself. You deserve it. No one else would have bothered to help that guy, but you were there to lend a hand. Respect.”

“This was the best birthday present I ever received from any friend. Big ups. I’m glad I have good buddies I can trust in my life.”

“That was an amazing track. You’ve come a long way over the last two years, and your production skills are off the chain. Big ups.” 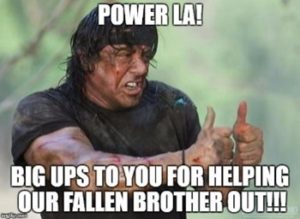 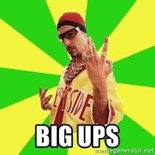 The expression ‘big ups’ originates from British slang in the 1990s. It stems from the Caribbean islands and Rastafarian and dancehall culture found throughout the region.

The phrase was popularized with ‘The Ali G Show,’ featuring British comedian Sascha Baron Cohen. Ali G was a character from Berkshire and deeply connected with the street life in his neighborhood.

Cohen took the Ali G character to the United States, where he interviewed several high-level politicians and business people, including Donald Trump. Ali G was famous for using British street slang during the interviews, ending his exchanges with ‘big ups’ and a fist bump to the person interviewed.

Ali G was a popular media personality in the 2000s before Cohen transitioned to the ‘Borat’ character.

Phrases Opposite to Big Ups

The phrase has nothing to do with lifting objects or anything ‘big.’ It’s a way of conferring gratitude or respect or just another way of saying goodbye to someone. The phrase was popular around the 2000s, especially with the launch of the Ali G show. However, it’s less common to hear it used in modern language.

You can use the phrase ‘big ups’ in social conversations with friends. Typically, it’s used as a farewell greeting or as a way of showing a person a sign of respect during the conversation. It’s common for people to phrase it as ‘big ups yourself.’ If you say it to someone, you’re giving them kudos for something they’ve done.

For instance, you could use ‘big ups’ instead of ‘goodbye’ when talking to friends. You could use it during a friendly conversation when someone says something you find admirable. ‘Big ups’ means that you respect the person and their behavior or actions.