Are you looking for a phrase you can use to confront someone about an issue between you? You can use “bone to pick” to tell them that you want to have a stern chat with them. This post unpacks the meaning and origin of this expression.

The expression “bone to pick” means that you want to confront another person or group about a specific topic. It means that you have something that you’ve been thinking about for some time, and you’re ready to confront the person to hear what they have to say about it.

“Hey Mike, I have a bone to pick with you. Why did you tell Halley that you saw me out with Cindy on the weekend? Why are you interfering in my business.”

“Listen, Sam, I have a bone to pick with you. You’re always leaving the toilet seat up, and it’s driving me nuts.”

“I’m going down to the council now. I have a bone to pick with these people over how they charge rates. They’ve been overcharging for months, and I’m fed up with it.”

“Why do I have to come to you every time and air my grievances? It seems like I always have a bone to pick with you, and I’m getting tired of it.”

“I have a bone to pick with you. There was that one time when you said to Tommy that I was a hustler and didn’t trust me. What do you have to say about that?”

“I have a bone to pick with you over the Carter proposal. How can you commit resources to that project when you already know you were overworking the team?” 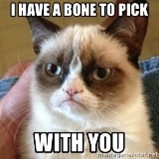 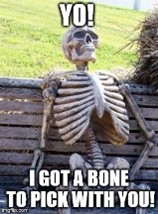 The expression “a bone to pick” originates from the 16th century. The early use of the phrase was literal, referring to picking or gnawing on a bone to strip it of its meat. However, this saying developed its modern meaning a few hundred years later.

A similar phrase, “a bone of contention,” originates from two dogs fighting over a bone to see who gets the spoils. Both sayings have a similar meaning and were in use at around the same time.

However, language experts believe “pick a bone” is the shortened version of the longer saying. As it became more popular in language and conversation, people went with the shorter version o the saying, as they do with many other abbreviated idioms.

Phrases Similar to Bone to Pick

Phrases Opposite to Bone to Pick

The phrase has nothing to do with picking bones. The bone is a topic of discussion relating to other people’s actions or words against you. “Picking” means that you want to have a stern chat about the issue at hand with the other person.

Use it at the office to confront a disgruntled co-worker about saying things to the boss behind your back. Or use it at home to tell your kids you want to talk to them about leaving the toilet seat down. Depending on the situation, the phrase can suit a mild or serious threatening tone.