Did your ‘BSF’ text you asking if you want to go to the movies tonight? This post unpacks the meaning and origin of this acronym.

The abbreviation ‘BSF’ stands for ‘best friend.’ It’s a common acronym found in online communications between friends. Typically, women and girls will use BSF, but some boys may also use the term when referencing their best friend.

A ‘BSF’ is the closest person to you outside your immediate family. They aren’t your brother or sister but could be your cousin. You share your most intimate thoughts and secrets with your BSF, and they do the same with you. It’s a reciprocal relationship where both parties get fulfillment from being around each other.

BSF also has an alternate meaning online. It can refer to ‘But Seriously Folks.’ You’ll use this expression when asking someone to take you seriously because they think you’re toying with them. Or, it acts as a segue to saying something important after breaking the ice with something comical.

“Aww, you know you’re my BSF, babe. I love hanging out with you, and I treasure the time we spend together every day. I couldn’t ask for a better friend.”

“I think Carries over at her BSFs place this afternoon. You’ll have to text her to find out if she’s coming home for dinner tonight.”

“Everyone deserves a BSF. Your bestie helps you through the tough times in your life, and they’re there to share in the joy.”

“Kim is my BSF. She’s always there for me when I need her and always has my best interests in mind. I love hanging out with her. She’s so cool.”

“Sheila is my BSF, and we’ve been best friends since the first grade. We do everything together, and our parents say we’re joined at the hip.”

“What’s going on this afternoon? I’m thinking about hitting up my BSF to see if she wants to go for coffee at the mall.”

“You’re my BSF for life, girl. I know who I can rely on when things get tough in my life. You’re always there for me, and I appreciate you.” 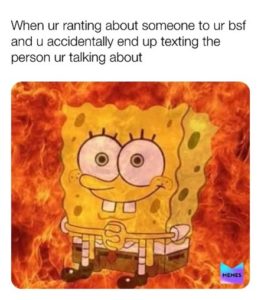 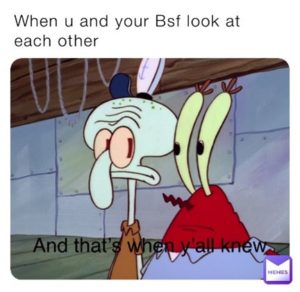 Language experts are unsure when the acronym ‘BSF’ arrived in the English lexicon or who coined its original use. However, the term appeared in the Urban dictionary for the first time in 2012. Experts think it’s a variation of the ‘BFF’ acronym representing ‘Best Friends Forever.’ While BFF remains the more popular term, BSF became a common alternative in the later 2010s.

The term is also part of the texting evolution of language. Many experts believe the acronym derives from text culture, where people abbreviate common words and phrases to reduce typing time. Even though most phones have QWERTY keyboards and predictive text technology, many users continue with the acronyms for their favorite sayings.

Phrases Opposite to BSF

Some people may confuse ‘BSF’ with the more popular version of the acronym’ BFF.’ However, ‘BFF’ is an acronym for ‘Best Friend forever.’ Typically, girls or women use the acronym to describe their best friend. It’s less common for boys and men to use acronyms like BSF and BFF to represent their best friends.

The term ‘BSF’ only suits text communications. You can use it in verbal exchanges, but it’s more common for people to use abbreviations like ‘BFF’ and ‘besties’ when discussing their best friend in a spoken conversation.