Did someone type ‘GG’ in the chat after you won a game of StarCraft? This post unpacks the meaning and origin of this expression.

The acronym ‘GG’ is online gamer slang and means ‘good game.’ It’s a congratulatory statement made by players to someone that wins the game. ‘GG’ means that the gamer had a good performance, and people in the chat are congratulating them for the win.

In some cases, the term ‘GG’ has a sarcastic meaning. Gamers will post ‘GG‘ in chat to troll the loser. The phrase has more use as a sarcastic term in the modern gaming vernacular.

“Hey man, GG. You really beat me on that one, and I have to say that’s the best performance I’ve seen in a long time. Good job.”

“GG man, haha. That was the worst performance I’ve seen in a long time. I hope everyone else mocks you. You deserve it.”

“That was shocking. GG, you’re definitely going to go far in this game, and I see your future is filled with nothing but frustration and suffering, lol.”

“GG. I wish you and your family nothing but the worst in life. Now, if you’ll excuse me, I’ll go and break something to celebrate.”

“GG, man, but I don’t think you’re the kind of player we need n our team right now. You can try out again next quarter. Maybe your skill will improve by then.” 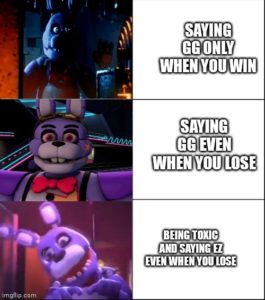 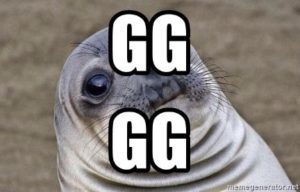 The expression ‘GG’ originates from the beginning of the online gaming era. The term’s first use goes back to the late 1990s and the invention of LAN gaming. This multiplayer gaming solution allowed people to network with others in their area to play game titles like ‘Doom.’

After noticing it appearing in Marathon gaming chats, John Brandon is the first to coin the term. This first-person shooter game allowed users to chat with each other while playing. Gamers would use ‘GG’ to congratulate each other on a win.

In 1998, StarCraft’s real-time strategy game, developed by Activision Blizzard, started a new era of online gaming, drawing millions of players to the platform. It’s widely accepted that this game popularized the use of ‘GG’ between gamers.

The earliest record of a gamer venting about the sarcastic use of ‘GG’ is in 1999 on the forum Internet ‘Chess Club.’ The user ‘Queenie’ published a rant about how he couldn’t stand how opponents type ‘GG’ after losing a match.

Phrases Opposite to GG

The acronym ‘GG’ is only suitable for online use. Some may think it refers to the online parody TV network, ‘GG News,’ started by rapper Snoop Dogg, but this is incorrect.

You can use the acronym when you want to wish another gamer ‘good game.’ You’ll use it when showing good sportsmanship, congratulating the other player on their performance. You can use ‘good game’ with a genuine connotation or sarcastically, depending on the merits of the situation. For instance, if you beat someone and want to rub it in, typing ‘GG’ in the chat would likely infuriate them.

GG suits text-based conversations in gamer chats. It’s a common acronym used on streaming platforms like Twitch. Followers of Twitch creators could drop ‘GG’ in the chat to congratulate a streamer on their performance or mock them for a poor showing. You could also use ‘GG EZ’ to say ‘good game, easy win’ when a player dominates the competition.