Are you about to approach that perfect ten and tell them how beautiful they are? If so, you could be “gilding the lily,” and chances are they’ve heard it all before, and you’re going to do nothing but embarrass yourself.

This post unpacks everything you need to know about the origin, meaning, and use of this expression.

“Gilding the lily” is an expression meaning that you’re embellishing or adorning something already beautiful, and there is no need for it. The lily is a “perfect” flower and one of the most beautiful blossoms in the world. Therefore, there is nothing you can do to improve on its perfection.

Regardless of the context, “gilding the lily” means that you’re trying in vain to improve on perfection, and you’re doing nothing but wasting your time when you could be applying your resources and efforts to other tasks.

“John spent ten minutes telling me how he thinks I’m so hot. As if I haven’t had hundreds of men tell me that. I hate it when men approach me and start gilding the lily; it’s annoying.”

“Look at that tiger over there in the pen; I don’t have to say it’s a beautiful creature that would be gilding the lily.”

“Gilding the lily will get you nowhere with anyone; they’ll see through your intentions.”

“Describing the beauty of an aurora is kind of pointless; it’s already beautiful, and everyone knows it; stop gilding the lily and just appreciate it for what it is.”

“This system is perfect, and the IT team wants to try gilding the lily by trying to add extra features that aren’t going to bring any value to the system.” 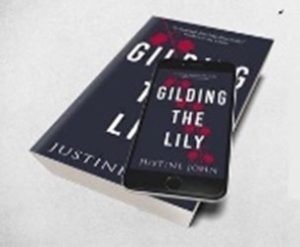 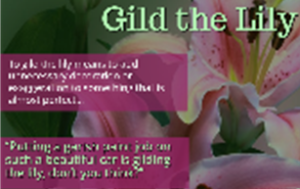 The origin of “gilding the lily” comes from a misquote of the playwright, William Shakespeare. Shakespeare’s 1595 play, “King John,” has the following passage.

“To gild refined gold, to paint the lily.”

The Newark Daily Advocate would misquote the phrase in 1895, reading as follows.

“One may gild the lily and paint the rose.”

During the 20th century, the phrase “paint the lily” became the more popular iteration of the term, as “gilding” is a somewhat archaic language and doesn’t have any use in modern English.

However, many people would revert to the original use of the idiom in the late 20th century, reviving the saying into several formats, including gilded the lily, gilds the lily, and gilding the lily.

Phrases Similar to Gilding the Lily

Phrases Opposite to Gilding the Lily

Some people may use the phrase when gardening or talking about lilies. The Lily in the term refers to perfection or beauty, not the flower. Therefore, you wouldn’t use the phrase to describe plants or flowers but to describe any other object that looks perfect.

You can use the phrase “gilding the lily” when you’re trying to tell someone that they are being facetious with their referencing of someone or an object being beautiful or perfect. If it’s obvious that the subject in question cannot benefit from improvement, then they are gilding the lily.