Did someone call you a ‘gringa’ while walking through a Mexican community? This post unpacks the meaning and origin of this expression.

The expression ‘gringa’ is a Spanish term referring to a white woman. It’s a common expression used throughout Central and South America and pertains to all white-skinned females.

Gringa is a slang term integrated into American culture with the influx of Mexican immigrants into the US during the 1990s. Some people suggest it refers to the white flour tortilla, a favorite food of the Mexican people (and many Americans).

The term ‘gringa’ can have an offensive or playful connotation, depending on the context of the conversation. Some people view it as a racist expression, while others don’t have a problem with it.

If a Mexican person calls you a ‘gringa,’ it doesn’t always mean they’re insulting you. Some Mexican people use it as a term of endearment, more than an insult.

“Hey Gringa, what are you doing around here? Don’t you know it’s not safe for you to be walking these streets? Best you back to your hotel right now.”

“I was walking through Mexico City, and a Spanish guy called me a ‘sexy gringa.’ What does that mean, and should I be offended?”

“Yo, Gringa, why don’t you try some of my fried chicken. I know my food stand isn’t what you’re used to, but I have the best chicken in Mexico.”

“I was walking through the town this morning and saw this beautiful gringa. She had long blonde hair and blue eyes. I think I’m in love with an American.”

“Why do Mexican people keep calling me ‘gringa?’ It’s annoying and frustrating. I can speak Spanish, and I always give the men a tongue lashing when they call me that.”

“There’s no way I’m letting a filthy gringa like you pollute my national culture. Get out of here and go back to your country. Your kind isn’t welcome in Mexico.”

“Hey gringa, if you want to experience the finest Mexico has to offer, you need to try this blue agave tequila. It’s the best in the world, have a sip and tell me what you think.” 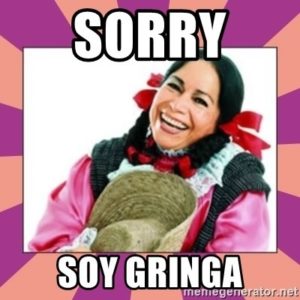 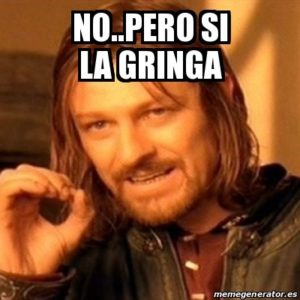 The Spanish term ‘gringa’ has unknown origins. Experts cannot pinpoint the date it entered English as a slang reference for a white woman. However, some experts believe it integrated into English in the southwestern United States during the great immigration of Mexican people to the US during the ‘Tequila Debt Crisis’ in the 1990s.

The word spread throughout the English vernacular, and most Americans understand the meaning of the word. The first entry of ‘gringa’ into the Urban Dictionary was in December 2006. It’s a common expression used by Mexican and Latin-American communities across the United States.

Phrases Opposite to Gringa

The term ‘gringa’ applies to women and girls, not men and boys. Using it as a description of a white male is incorrect, and the correct term is ‘gringo.’ Using the expression to describe any other race than white people is erroneous.

You can use the phrase ‘Gringa’ if you have Mexican or Latin-American descent and want to describe a white woman. It’s a somewhat racist term but common throughout Central and South America as a description of a Caucasian female. Typically, it refers to white American women.

Most people will say it directly to your face, and the term can have a neutral, positive, or negative connotation, depending on the context of use. Calling someone  ‘gringa’ can be an insult, a comical term, or just a harmless description. Some white people may also use the expression to describe themselves to Latin-American people.