Did you receive a text from a friend telling you something exciting? You could reply with ‘OwO‘ to represent your shock and awe. This post unpacks the meaning and origin of this text expression.

The text acronym ‘OwO‘ doesn’t have a direct meaning. It’s not an abbreviation. Instead, the capitalized ‘O‘ in the term describes wide-open eyes. The ‘w‘ describes a person’s nose. Therefore, it’s an emoticon depicting a state of surprise, excitement, shock, and awe.

You can think of ‘OwO‘ as a replacement for typing the exclamation ‘ooooooooo’ or ‘wooooo’ after receiving a piece of exciting or surprising news from another person over a text message.

It’s a versatile emoticon, and many users will swap out the ‘O‘s in the term for ‘U‘s or other letters. This action changes the facial expression and the meaning of the term. By changing the ‘O‘ for different letters, you can make a face that appears upset, angry, tired, or sad.

“What do you mean you were chosen for the Olympic team? OwO, that’s some accomplishment. Well done. When do you leave for the games?”

“OwO, I can’t believe you said that to me. You caught me off-guard with that, and I don’t know how to reply. Give me a minute to think.”

“OwO, there’s no way I would have done what you did. Swimming out to save that guy was dangerous, and I can’t believe you didn’t drown.’

“OwO, you have my attention. How is it that you think you can get away with this? There’s no chance I’m letting you do that. I’m going to report you to the police.”

“OwO, I’m shocked that you managed to get it done. I thought you were in for a nasty surprise for sure, but you came out on top like a champ.”

“OwO, did you see that KO in UFC? That was shocking. I don’t know how these guys can take these shots and survive. I would be in the hospital with a TBI.”

“OwO, that’s surprising. I had no idea things would end up like that. Keep me posted on the events as they happen, okay?” 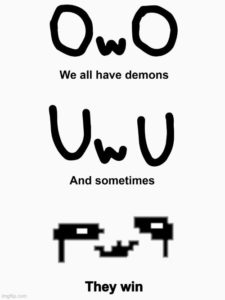 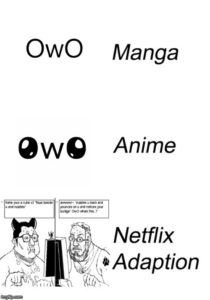 The expression ‘OwO’ originates from text messaging culture. Language experts are unsure when it appeared in text culture or who was the first to coin the use of the term. However, some text experts believe it originates from Japan and is part of the first set of emoticons representing human facial expressions.

Some experts think this term originates from the ‘Furry’ community, where people would impersonate animals and develop animal identities. Some experts suggest the emoticon is an advent of anime culture and a representation of the large eyes featured on many anime characters.

Phrases Opposite to OwO

The phrase is a part of texting culture and is understood by people in Gen X, Gen z, and Millennial demographics. Using it in conversations with baby boomers may result in confusion about its meaning. Typically, you’ll use the term when referring to positive events, not negative outcomes.

You can use the term ‘OwO’ in text message conversations with friends. It is not suitable for professional communications. You’ll use the phrase when you want to exclaim a pleasant surprise at a turn of events. Use it when a friend tells you something you find exciting or appealing. It’s a way of conveying your excitement at someone’s message to you.