Did someone just reply to your last text message with ‘k’? If so, you better end the conversation and leave them alone. This post unpacks the meaning and origin of this expression.

The letter ‘k’ is an abbreviation of the word ‘okay.’ It’s commonly used on social media, in text messages, and in verbal exchanges. If you say something to someone and they reply with ‘k,’ it means they are uninterested in what you have to say, or they find you offensive or boring.

It’s common for women to use this expression in text messages when speaking with someone of the other sex that’s hitting on them. If someone sends you ‘k’ in response to something you say, it’s time to end the conversation.

“Why are you being like this? I send you a heartfelt message, and you reply with ‘k.’ Thanks, I thought you were someone I could talk to about this.”

“K? What do you mean? Was it something I said? Why are you turning the cold shoulder on me like this? I don’t deserve this kind of treatment from you.”

“I was chatting with this girl online, and she sent me ‘k’ as a reply to a question, then she went offline. Do you think I upset her?”

“If you feel I’m providing you guys with good content, hit the like button, k? I put the work in for you guys, and the least you can do is hit the thumbs up, please?” 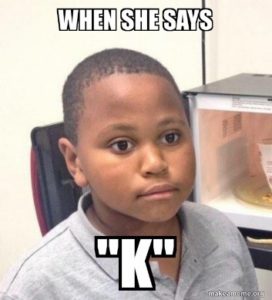 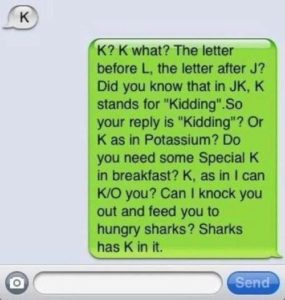 The expression ‘k’ evolved from text messaging and the need to abbreviate words to save time typing. During the introductory period of cell phone technology, people would use a numeric keypad to type messages.

The user would have to press a number key several times to access the letter they needed in their message. As a result, people started making abbreviations and acronyms for commonly used phrases, words, and terms in text messages.

Language experts are unsure who coined the term or when it first appeared in the texting lexicon. However, experts claim it’s one of the original abbreviations used in text messaging, circa 2008, and the invention of the iPhone, predictive text, and QWERTY keyboards.

Despite the shift to new tech, most people used ‘k’ as an abbreviation for ‘okay.’

Phrases Opposite to K

Some people may use ‘k’ as a confirmation statement with a positive tone to it. However, most people see this response as a way of the person agreeing with them just to get them to stop talking. While it’s most commonly used in text messaging, it can also apply to verbal exchanges.

You can use ‘K’ as a response in text messages or DMs on social media. You’ll use it when you want to let someone know you heard what they said, but you find it annoying, boring, or unacceptable. Typically, it’s the final message in a conversation and a definitive statement letting the other person know they made a mistake that irritates or annoys you in the last message they sent.