Did someone tell you to stop acting like an ‘NPC?’ This post unpacks the meaning and origin of this expression.

The acronym ‘NPC’ stands for ‘Non-Playable Character.’ An NPC is a video game character with no role in the game. NPCs may say lines to your character in the game, but it’s always the same thing, with no variation.

So, a person who is an NPC is someone that regurgitates another person’s ideology and has no independent worldview or opinions. They blindly follow others and trends because they are incapable of critical thinking

“That guy over there is such an NPC. You can see from the blue and pink hair, the glasses, the tight jeans, and the rainbow button on his lapel. Let’s get away from here before he tries to talk to us.”

“The people at that company are all NPCs. It’s like working in an office with robots. I can’t take another day there. I’m calling the boss and quitting over the phone right now.”

“Don’t be such an NPC, man. Do you ever have a single independent thought, or do you just repeat CNN in your head all day?”

“I can’t stand NPCs. They’re so annoying to be around. They all have this hive-mind social behavior, and none want to listen to counter viewpoints on anything.”

“I hate to tell you this, but you’re such an NPC. Why don’t you formulate your opinions instead of relying on the garbage spoon-fed by the mainstream media?”

“I’m an NPC? Well, I guess you’re one of those guys who think Trump won the election or that Biden’s son is guilty of receiving bribes on behalf of his father.”

“NPCs are impossible to debate. They have a stead-fast ideology that isn’t theirs and refuse to see the light when presenting a counterargument.” 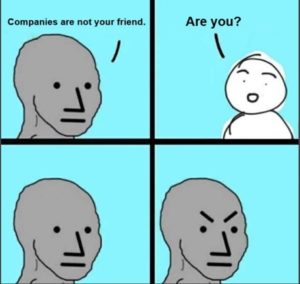 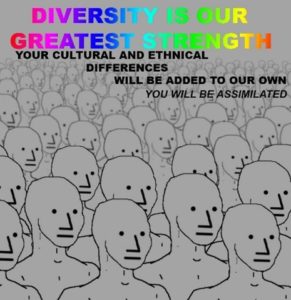 The acronym ‘NPC’ originates from the world of gaming. NPCs are characters in the game that you can’t control. They don’t have any role in the game and are generic characters designed to fill in the gaps in landscapes and scenes.

The first use of the term concerning people was from a 4Chan user in July 2016. An anonymous user published the post ‘Are you an NPC?’ along with the original NPC meme.

During the lead-up to the 2018 US mid-term elections, there was a spike in Google searches for ‘NPC Wojak.’ The Wojak character is a meme of the ‘Doomer’ persona and is closely tied to the NPC social context of the term.

The right adopted the meme, with users posting the image of an NPC in their profile. As a result, Twitter banned over 1,500 accounts using the NPC meme as their profile picture in 2018. The ‘I support the current thing’ NPC meme first appeared in 2022 after the Russian/Ukrainian war broke out.

Phrases Opposite to NPC

The phrase ‘NPC’ refers to a ‘non-playable character’ in video games. However, the idiomatic context of the saying refers to someone blindly following other people’s ideologies without thinking for themselves. While using it to refer to NPC characters in games is correct, it’s no longer the core use of the acronym.

You can use the term ‘NPC’ in online conversations and verbal exchanges. You’ll use NPC to describe someone whose actions seem robotic or like they aren’t in control of what they say. It represents a person that has manipulated worldview and no original thoughts of their own. The acronym suits social situations but is not suitable for professional communications.

You can use ‘NPC’ with millennials and Gen Zs that understand the term. The left accuses the right of using the NPC meme to bully its supporters online. The recent use of the ‘I support the current thing’ and the NPC featured in the image stirred controversy in the American public, seeing it as another banned meme, like ‘Pepe the Frog.’