Did your friend call you an ‘OG’ in a text message? This post unpacks the meaning and origin of this acronym.

The acronym ‘OG’ stands for ‘Original Gangster.’ It originated from hip-hop and gangsta rap, spreading throughout the community in the late 1990s and early 2000s.

The term has several variations, including ‘real OG,’ referring to an old gangster that’s past their sell-by date but still in the game, and ‘triple OG,’ meaning someone that made it out of the hood to a normal life, but still retains their connection to the street life.

You can call people or objects OG. For instance, if your friend bought a custom Dodge Charger, you could say it’s an ‘OG’ car. You don’t have to be involved in the gang lifestyle to be an OG. Now, the term refers to anyone with a high level of respect in the community.

“Ross is an OG. We always get our stash from that guy, he’s been growing for years, and he’s the biggest name in the game.”

“Snoop Dogg is an OG of the rap game. He’s been around since the early 1990s and is still one of the biggest names in cannabis and hip-hop.”

“This OG strain is amazing. The smell and taste of the terpenes are exquisite, and it’s the best I’ve tried this year for sure.”

“That move was so OG. I loved how you just took command of the situation and had everyone eating out of the palm of your hand.”

“You’re the OG, my dogg. We do what you say. Tell us what you want us to do, and we’ll make it happen for you. No questions asked.”

“If you want to be the OG on the block, you have to act like the top dogg. No one will respect you if you don’t stamp your authority on the neighborhood.”

“Let’s go and hang out with John. He’s a real OG. We can always listen to him tell us stories about the old days on the block.” 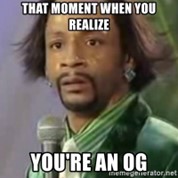 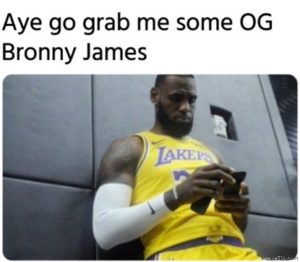 The expression ‘OG’ originates from the early 1970s in South Central Los Angeles. The LA-based ‘Crips’ gang was the first to coin the term, describing it as‘ original gangster.’ Members of the Crips gang would use ‘OG’ when describing which branch of the Crips they belonged to, such as the OG Eastside or Original Eastside Crips.

The term entered hip-hop music and rap culture in the mid-1980s, with LA rapper Ice-T using it as the title of his 1991 studio album. The album reached #7 on the Billboard rap charts.

Rappers Cypress hill would coin the use of ‘OG’ in cannabis culture. The hip-hop super group would promote a strain of cannabis ‘OG Kush’ in their music. In this context, OG refers to ‘Ocean Grown’ cannabis originating from the west coast.

Phrases Opposite to OG

The term ‘OG’ also refers to a strain of cannabis, originally created and marketed by the hip-hop group ‘Cypress Hill.’ ‘OG’ in this case stands for ‘Ocean Grown,’ referring to cannabis grown near beach locations in California. When you’re spelling OG in texts, you’ll use it in upper-case characters, using it in lower-case is incorrect.

The acronym ‘OG’ suits social conversations with friends where you’re trying to describe something or someone ‘gangsta’ or an old person that’s still cool. You can use ‘OG’ in text communications or in verbal conversations. People will say ‘OG’ in verbal exchanges rather than call someone an ‘original gangster.’

While the phrase initially had a place in gangster rap and violence, it’s now a term used to describe anyone that’s ‘been around the block’ and has life experiences other people find interesting. You don’t have to be involved in gang life to be an OG. For instance, Joe Rogan would be an OG in the podcasting and comedy game.