Are you supporting the Crimson tide this season? You’ll probably hear the slogan ‘Roll Tide!’ During the games.

The expression ‘Roll Tide!’ is a rallying cry used by fans of the Alabama state college football team, the Crimson Tide. Fans will use the phrase to rally their team and the fans during games.

‘Roll tide’ can also act as a slur against people with a southern upbringing that appear uneducated and unsophisticated. It’s also a viral term said by people on social media as they’re being arrested for a crime.

“Roll tide! Let’s go, boys! It’s the first down, and we’re in scoring distance now. Take it to them and make it happen for the fans!”

“Roll Tide! Alabama is on a tear this season, and it looks like they might even have a shot at a bowl game this year if they keep this performance up.”

“Look at that country hick sitting over there on his truck with that straw hanging out of his mouth. What a country bumpkin. Roll Tide!”

“Okay, so you think it’s fine for people to have relations with their family members down here? I guess all I can say is ‘Roll Tide!’”

“People in the south seem so backward to me. Whenever I see a dumb country bumpkin, I yell ‘roll tide!’ in their face. It’s so funny because they get so mad at me.” 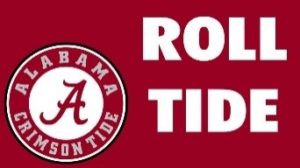 The first entry of Roll Tide! Into the Urban Dictionary is in March 2004, but has a definition mocking the use of the slogan and Alabama students. The traditional definition of the slogan appeared a year later, in 2005.

Crimson Tide Fans will use the term to antagonize the opponent’s fans in the stands. The team has a big rivalry with Auburn, and you’ll hear the fans sing it when they’re winning or during crucial moments in the game.

There was a 2017 trend involving people saying the slogan after being arrested by the police.

Phrases Opposite to Roll Tide

The expression ‘Roll Tide’ has nothing to do with the ocean or the tide. It’s a rallying cry supporting the Alabama Crimson tide football team. Using it for any other purpose than helping the team is incorrect.

You can use the phrase ‘Roll Tide’ to support the Alabama ‘Crimson Tide’ college football team. It’s a common slogan understood by all Crimson tide fans and a rallying cry at games and related events. You’ll hear people use it at sports bars when supporting the team, in parking lots at home games, and in the stands during the game.

Many people use ‘Roll Tide’ as a way to describe a backward ‘country bumpkin’ from the southern states. It’s a derogatory term and could start a fight if you say it with hostile meaning to an Alabama fan. You can use ‘roll Tide’ in text-based communications and verbal exchanges. There is no accepted abbreviation of the term.