Are you looking for a posh way to say goodbye to people? You could say “toodles” to them after you leave your appointment for high tea and head to the parking lot. This post unpacks the meaning and origin of this expression.

The expression “toodles” is a farewell greeting to other people when making your exit. “Toodles” is somewhat of a posh choice of farewell, and it’s an upper-class greeting that doesn’t suit all occasions. Typically, older women will use the phrase for people with high-class representation in British society, such as the Royal Family.

However, in recent years, the gay and trans community adopted the saying as a feminine way to say “goodbye.” You’ll probably hear gay men use it more than women in media and real-life conversations. The phrase also has a teasing sarcastic use in some situations. You could use it to tease someone who is leaving an engagement early.

“Alright, this was a simply superb tea. Thank you for inviting me, Diana. I hope all of you ladies have a wonderful afternoon. I’m off. Toodles, I’ll be seeing you all soon.”

“Toodles all. Greg and I are on the way out. I just wanted to thank you all for such an amazing evening. Let’s keep in touch.”

“Thank you for having us. We really appreciate the hospitality. Dinner was amazing, and the dessert was delicious. Toodles, we’ll be seeing you at the lake house next week.”

“Right, everyone, toodles to you all. We had a great time, but I’m afraid it’s getting late, and it’s time for us to head home before the sun sets.”

“Hold on for me a minute, dear. I must find Kim to tell her toodles. We won’t be seeing her for some time, and I want to wish her farewell for her trip to Paris.”

“Let’s find the host and take our leave. It’s time to tell everyone toodles and go home before things get heated.”

Oh well, we have to go. Toodles everyone. I’ll see you soon and stay warm this weekend with the coming storm.” 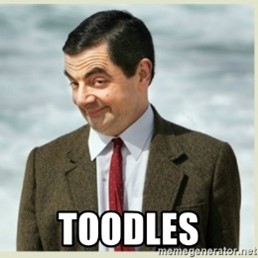 The expression “toodles” originates form the French phrase “à tout à l’heure.” This saying translates to “see you soon.” English society adopted the expression in variations like “Toodle-oo” or “toodeloo.”

As the years went by, people shortened the saying to “toodles.” According to language experts, the word has been around since the late 1800s, and it became a greeting for people in high society in England in the 1900s.

By the end of the 1900s, the saying was popular with effeminate men and older women. It’s common for people to use it to mock a person’s lack of masculinity. However, it’s becoming less of a popular greeting worldwide, and many people view it as pompous language.

Phrases Opposite to Toodles

“Toodles” is somewhat of an “upper class” farewell greeting. Using it around working-class people will likely make you seem pompous.

It’s also more common for people to use it in the United Kingdom. You’ll find it’s not a common farewell greeting used in the United States, other than by people in the “WASP” class.

You can use “toodles” as a substitute for “goodbye.” It’s usually a feminine-style greeting, or it has a posh context and connotation to the way people include it in language. You could use “toodles” if you’re leaving the company of people after a high tea and you want a farewell greeting that suits the occasion.

Typically, the phrase is used more in the UK than in the US. It’s usually said by people in the Baby Boomer generation and less by the Millennials and Gen Zs. Even in England, it is somewhat archaic language and falling out of favor in modern English.