Do you have a man crush? Why not post it on social media with the hashtag #MCM?

This post unpacks the meaning and origin of this viral acronym.

A man crush is someone you like but don’t have any chance of meeting in real life. Since you’ll never meet them, you’ll never have the chance to act on your feelings. The #ManCrushMondays hashtag is popular on social media platforms like TikTok, Twitter, and Facebook (Meta).

‘MCM’ is the abbreviated format of ‘ManCrushMondays,’ and it has the same meaning. ManCrushMondays is usually used to describe hot-looking guys. However, some users post #MCM, describing men they find intelligent or admirable, such as Neil De Grasse Tyson or Bill Nye. It can also refer to animated characters like Homer Simpson.

“Yay! It’s Man Crush Mondays! Join me in posting your man crush in this thread. I’ll get things started with this pic of my MCM, Leonardo Di Caprio.”

“That #MCM hashtag is gaining traction on social media. It’s amazing how many women have crushes on celebrities they’ll never meet in life.”

“Take a look at the #MCM trend on TikTok. There are millions of women posting their man crush every week. It’s a crazy trend.”

‘Oh no, it’s ManCrushMondays, and I don’t have anything to post. Oh well, I guess I’ll have to browse other people’s crushes today.” 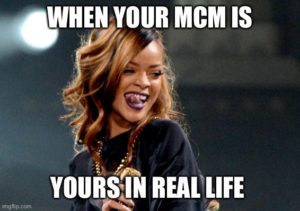 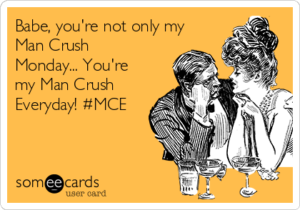 The expression ‘Man Crush Mondays’ originates from social media. Language experts are at a loss to describe who coined the term or the exact date it started appearing on social media. It was common to see the expression appear on platforms like Twitter and Facebook, where women would begin the trend of describing their man crush.

The first posts around ‘Man Crush Monday’ seem to kick off the trend in 2013, with the first entry in the Urban Dictionary occurring around this time. ‘Man Crush Monday’ is also the title of a best-selling book by Kirsty Moseley, published in February 2020.

Phrases Opposite to MCM

The phrase ‘Man Crush Monday’ applies to women. Some gay men may use the term to describe people they like, but it’s more common for women to post the hashtag on social media. If you’re a man, you’ll use the term ‘Woman Crush Wednesday’ or ‘WCW.’

The acronym ‘MCM’ stands for ‘Man Crush Monday.’ You can use the term on social media sites like TikTok, Twitter, and Instagram to describe your man crush. Most people post the hashtag #ManCrushMonday or #MCM alongside a caption or image of the person they have a crush on. The term is well understood as an acronym; most people will know what you’re referring to.

If you use ‘MCM,’ you’re referring to someone you find attractive. It has no sarcastic use. Women and teenage girls can post MCM or ‘Man Crush Mondays’ videos on social media. It’s common for these images or videos to include male celebrities, sports stars, and musicians.