Are you looking for the ultimate way to tell people you’re awesome? You could tell them you have “mephobia,” and if they knew how awesome you were, they would die. This post unpacks the meaning and origin of this expression.

The expression “mephobia” is a self-gratifying term meaning the fear of becoming so awesome that the human race can’t handle it, and everyone dies.

It’s a way of saying that you think you are the most awesome person on the planet, and people should show you respect for the contribution you make to your community.

“Mephobia” comes out of the gamer community, and it’s a common meme on internet message boards and forums like 4Chan and Reddit. If you think you have mephobia, you might be dealing with the following symptoms.

If you have mephobia, you’re a self-absorbed person, and you’re not as great as you think you are. People might mock you behind your back online.

“I just finished as the leader in the game. I’m the sole survivor and at the top of the leaderboard. Eat it, suckers, I have a case of mephobia, and you all should bow before me.”

“Dennis is such an egomaniac. He keeps walking around calling himself the “Golden God.” He must have a severe case of mephobia.”

“If you have mephobia, you need a reality check. You’re not so awesome that people will just fall over themselves and die. What are you thinking?”

“I can never let you guys know my true identity. If anyone discovers who I am, they’ll get mephobia about how awesome I am, and everyone dies.”

“Yes, I have mephobia! If you all find out how awesome I really am, you’re all going to die!”

“So, you think you’re the best thing since sliced bread, hey? It’s clear you have a case of mephobia. Let’s leave him alone.”

“Some streamers have a severe case of mephobia. It’s like they think that if anyone finds out how awesome they are, they’ll die.”

“Mephobia is a problem with streamers. They all think they add value to society, but they’re doing nothing but providing pointless content to pointless lives.” 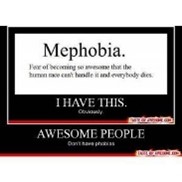 The expression “Mephobia” originates from online chatrooms like 4Chan and Reddit. The first meme using the word as a caption appeared in April 2011. Language experts are unsure of the exact origins of the phrase and how it integrated into society.

However, it’s commonly thought to come from the streaming gamer culture or from forum or message board culture. People create strange terms and slang in these environments and apply them to their speech online.

Some people may misspell the saying as “meophobia,” which is incorrect. Using this in a professional setting would confuse people unaware of slang terms and memes. It’s informal language and improper for the workplace, despite its harmless meaning and use.

You can use “mephobia” in social chatrooms and in text conversations. It’s a common meme posted to message boards when people are feeling good about themselves and the impact they make on the environment.

If you think you’re so awesome that other people might die, you have a  lot of confidence in yourself, and you probably achieved an important goal for yourself recently. While it is a self-centered phrase, we wouldn’t consider it a selfish expression. If you’re being “awesome,” it means that you’re creating an “impact” on others with your actions or words. The phrase isn’t suitable for professional use.