Are you thinking about where you should take your date tonight? Why not swing past the amusement park and take her on the rollercoaster? The “suspension bridge effect” could work to your advantage and land you that second date and a new partner in a relationship.

What is the “suspension bridge effect,” and what does it have to do with your dating life? This post unpacks everything you need to know about this phenomenon.

The suspension bridge effect is a scientific and psychological term used to describe a biological reaction in our psychology when we are under pressure. When we experience external stimulus that ignites our adrenal response, it plays a strange role in our minds and interpreting our environment.

The Suspension Bridge Effect is also known as the “misattribution of arousal.” It’s a phenomenon stating that something looks better when under a pressure environment, like standing on a suspension bridge.

Typically, the phrase’s experiment involves men’s feelings for women when they experience exposure to an adrenaline-inducing situation, such as standing on the suspension bridge. Men will find unattractive women more visually appealing and become more sexually aroused when they are in dangerous, adrenaline-inducing scenarios.

“Look at that girl over there, she must be under the suspension bridge effect, or that guy has some deep pockets.”

Tim: “Kim and I went riding dirt bikes the other day, and I’m feeling some kinda way about here now. There’s just something about a woman that can handle a machine like that.”

Susan: “I went riding dirt bikes with Tim the other day, and I think I have a crush on him now. Watching him ride ahead of the pack was so thrilling.”

Dee: “Are you sure you’re not feeling the suspension bridge effect there, girl?” 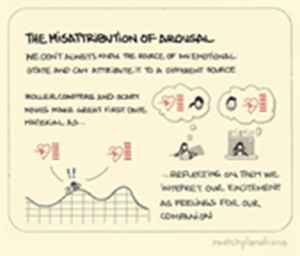 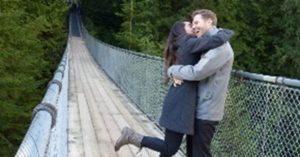 At the time, the scientists labeled it the “misattribution of arousal.” The team asked candidates what they thought of a woman’s attractiveness while standing on a straight, sturdy concrete bridge. They asked the same many the same question when standing on a suspension footbridge.

The results of the test show the man is more attracted to the woman when standing on the suspension bridge. Therefore, introducing stimuli to the situation makes the person more attractive, forming a stronger bond – in short, taking your first date on the roller coaster is a good idea if you want to make a good impression.

Phrases Opposite to Suspension Bridge Effect